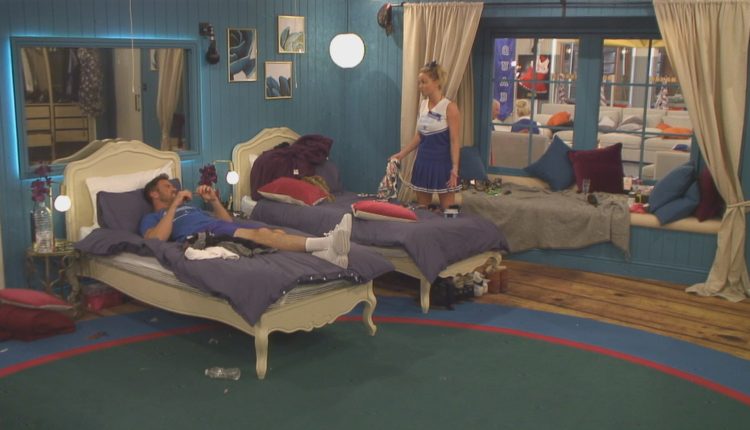 Day 13: Chad and Sarah talk about their kiss the previous night

In the garden, Jordan questions Chad, “So what’s going on with you and Sarah? Did you kiss her last night?” To which Chad replies, “I don’t kizzle and tizzle.” Paul adds, “To be honest, she’s into you and you’re into her, it’s nice. It’s just that there’s certain situations outside that she’s got to sort out.” Jordan asks Chad if they are going to go on a date after the show and Chad nods. Paul says that he’s got to “have respect for the guy out there.”

Jordan is in the Diary Room talking to Big Brother about Chad and Sarah, “Those two obviously got a connection with each other, they obviously fancy each other.”

Chad and Sarah are in the bedroom talking about last night. Sarah says “Right now I really just want to draw a line under it. It’s not going to change the fact that we’re friends. I just want to see how things are in the outside world. Because one day in here is like a week sometimes. It feels like we’ve known each other for a long time. I just feel terrible that I let my emotions get the better of me because my emotions are all over the show in here. I just don’t want to make a fool out of anybody. I just need to draw a line under what happened last night. At the end of the day, you’re single and I’ve only been dating for four weeks and I just don’t wanna hurt someone. I just need to respect other people on the outside.

Chad is in the Diary Room talking to Big Brother about Sarah, “We’re at this weird phase now where we have to take a step back and figure out what things are and what they aren’t, whether we’re hurting anyone on the outside world. You can tell she’s just pulled back for sure. I have to do the same.” Asked by Big Brother how he feels about that, Chad replies “I mean I’m not happy about it, but I understand it and I respect it.”

Paul is talking to Big Brother about Sarah in the Diary Room, “She kissed him, in the kitchen, in front of the cameras. I thought she’d be a little bit more tactful, that she wouldn’t be so blatant…. Can she be that silly?”