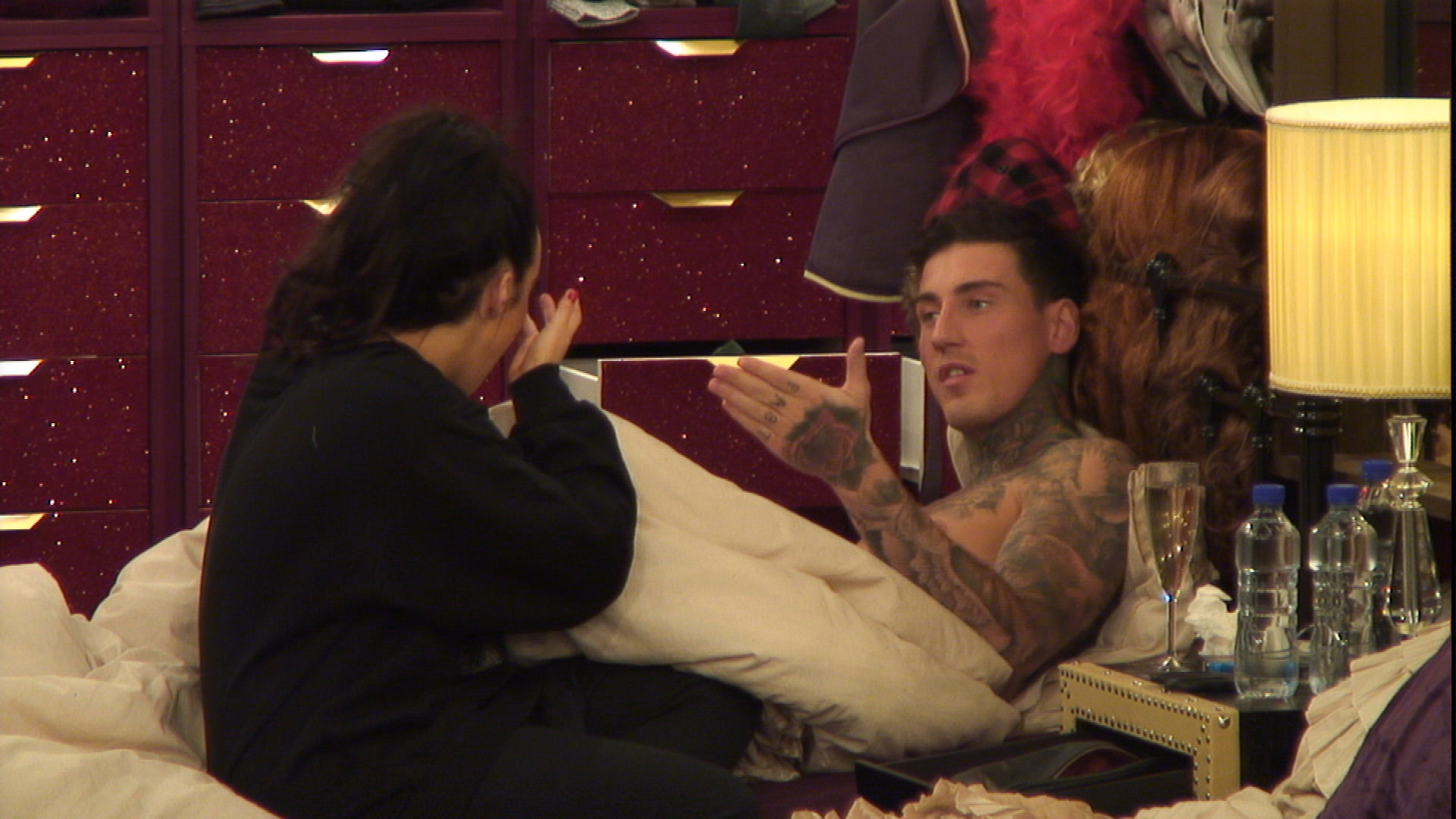 Housemates are playing Big Brother’s party game, where one housemate must draw a question from the box and pick another housemate that matches the statement.

During the game Scotty T reveals that he would miss Megan the most if she left the house, Angie thinks Tiffany would be the best in bed, Megan would least like to be locked in a room with John, John believes Gemma thinks she’s above the other housemates, Gemma would choose Kristina if she had to evict someone right now and Darren thinks that Tiffany is the least famous housemate.

Jeremy is talking to Christopher and Scotty T about Stephanie. He says “I’m worried about her, because she’s gonna look like a mug” and Christopher replies “but aren’t you as well?” Scotty T then asks if they have kissed and Jeremy says yes “the other night under the sheets.”

Jeremy and Stephanie are in the bedroom talking about their relationship in the house. He tells her “I’m not a dog” and “it’s too much, why are you doing it to me for? If you respected me and actually liked me you’d just walk out and leave me be” to which she replies “I love you too much to leave you on your own.” He then says that “the affection sh*t needs to stop. I’m finished” and “it’s like you want your cake and you want to eat it.”

Gemma and Danniella are discussing Stephanie and Jeremy. Danniella says “it’s not fair on him [Jeremy] and it definitely ain’t fair on the other fella.” Jeremy and Stephanie continue their conversation in the living room. Jeremy asks “what do we do from here?” and Stephanie says “I’ve never been in this position before.”

Kristina, Scotty T and Megan are discussing Jeremy and Stephanie. Kristina comments, “he knows the f*cking truth that she has a boyfriend. He’s not going to come out looking good out of this. Scotty T says “it’s her man. He just f*cking getting dragged around and led on.”

Scotty T reveals to some of the other housemates that Jeremy and Stephanie “were kissing last night” and Danniella adds “that’s not the first time either.”

Stephanie and Jeremy return to the bedroom and are in bed together under the covers. Gemma thinks they are kissing and tells Stephanie “it’s so wrong what you’re doing, you’ve got a boyfriend. Stephanie replies “Gem, who the f*ck are you trying to speak to me like that?” and Gemma says “I think you’re acting like an absolute disgrace.” Stephanie then tells Gemma “I can’t wait for you to see yourself when you’re out of here like what a horrible monster you are. Your attitude stinks, you’re a diva and that’s why no one’s ever liked you” and “who are ya? You’re off TOWIE. What’s your talent? Nothing.”

Stephanie is in the Diary Room talking to Big Brother, “Gemma’s a f*cking c*nt, I hate her” before going on to say “I took it too far being close to Jeremy and I’ll never be able to forgive myself.”

Talking about Stephanie’s comments to Gemma, Megan tells Gemma “you didn’t deserve that” and “it’s her defence because she knows it’s wrong so she’s trying to put it on someone else.” Darren asks Jeremy if he’s fallen for Stephanie and Jeremy says “100%”

Stephanie is still talking to Big Brother, “if you let me back in that house I’m gonna end up doing something I regret. Either if that’s punching Gemma Collins in the face which she deserves. She’s a f*cking diva, big lion headed c*nt who’s an absolute knob and people that do like her need to give their head a wobble because she’s disgusting.”