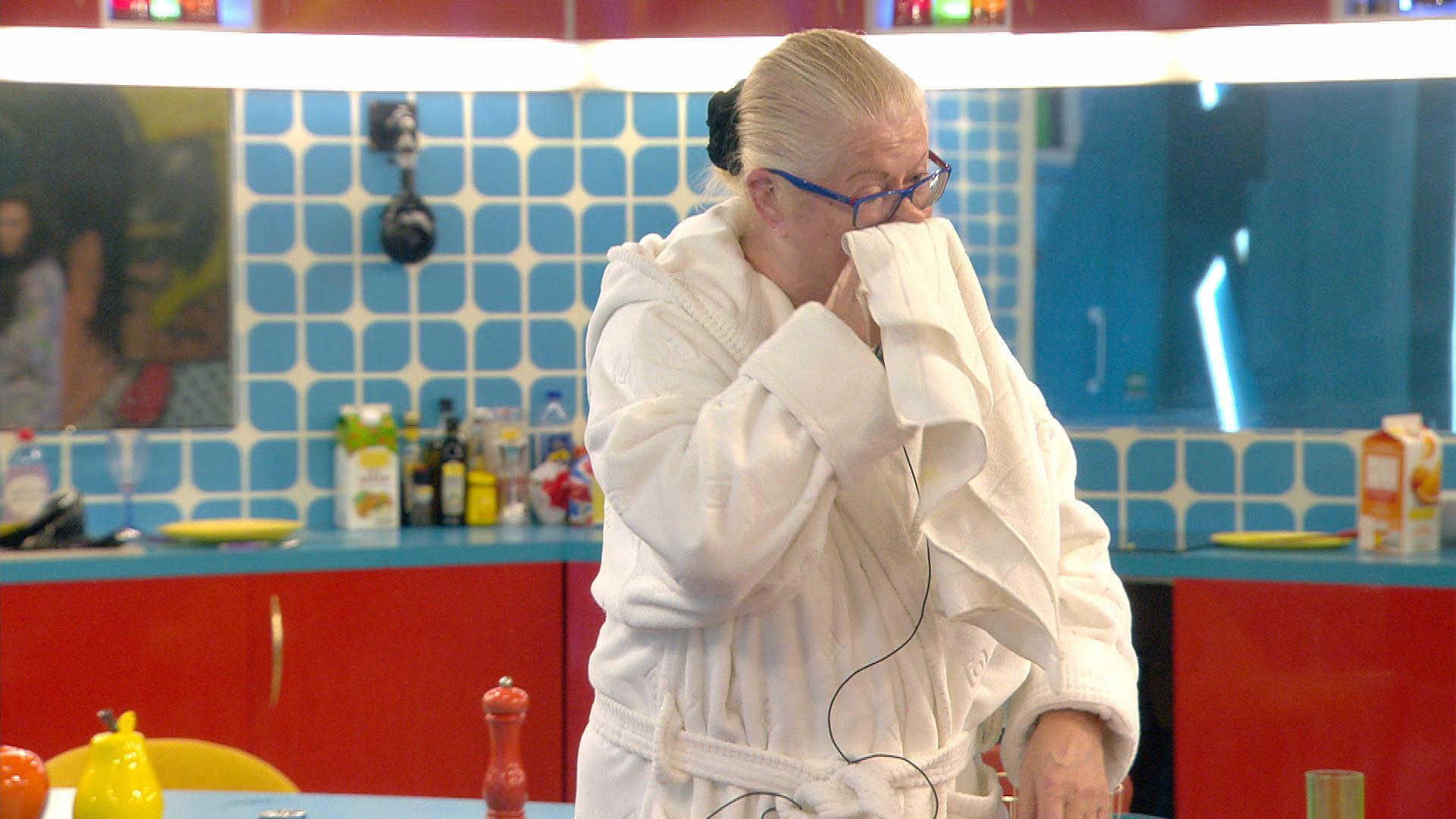 Kim isn’t finding her stay in the House very delightful…

Chloe and Jessica are in the bathroom discussing last night’s argument with Kim. Jessica says that Kim was tired, “She just went over the top.”

Chloe and Jessica are doing their make-up in the bedroom. Calum walks by and playfully squeezes Jessica’s shoulder. “Do you do massages?” she asks and Calum obliges.

Some of the Housemates are getting ready to go into the hot tub. Jessica tries to touch Jamie’s torso. As he walks off Chloe shouts, “Show us your chopper, the bell-end, one testicle.” Jamie replies, “You’ll see it, soon enough.”

Calum, Chloe, Jamie and Jessica are in the hot-tub. Chloe asks if any of the boys have had a “wank” in the house and they both say no. Calum says that the first time he was in the Big Brother house he always had “morning wood.” He laughs that this time around this isn’t the case. “You’re getting old now aren’t you Calum?” Jessica ribs.

James C, Kim and Nicola talking about Chloe. Kim says that she doesn’t “dislike” Chloe but finds her “a vulgar, nasty little girl.” Nicola says that Chloe finds it okay to act that way because that is how she behaves on Geordie Shore.

James J joins Calum, Chloe, Jamie and Jessica in the garden and tells them how the “washed up” reference came about. He mentioned he was laying it on thick as he thought they would be watching. Jamie is clearly annoyed and repeats, “Washed up footballer, really? Ok.”

In the house James J tells Nicola that he didn’t come into the house to “make friends.” Jamie is in earshot and tells James J that he won’t be “mugged off” by him. Jamie says that he is fine with “banter” adding: “You said you ain’t come in here to make friends, but if you come for my career, then we’re gonna have problems.”

Jamie and James J are having a talk in the bedroom. James J apologises and hugs Jamie adding: “I’m gutted with myself, I don’t know when to stop sometimes.” James J says that he is worried what Calum must be thinking but Jamie adds that Jedward had “stirred” things adding: “They’re nasty little s**ts.”

Some of the Housemates are asleep. Jamie, James J and Nicola are talking about last night’s events. James J mentioned that the trashing of the house would be worse if only one person was responsible. Nicola mentions that the boys said it was only James J who trashed the place. James J calls the boys out of bed and they try to explain themselves.

Kim follows soon after and tells James J to leave the boys alone and speak in the morning. James J tells her to mind her own business and Jamie adds that Kim has only been in the house a short while so doesn’t know how things have been. Kim snaps at James J unlike him she isn’t trying to win the show “and by God are you trying.” James J suggests that Kim “go and do some cleaning.”

Nicola says that Jedward don’t mind being woken and Kim shouts, “You pacify everyone, butt out, take sides, be a woman!” James J suggests that Kim get on with some cleaning and she retorts: “Don’t demean me cos I’m a cleaner, you fat slob!” Nicola takes James J and Jamie into the garden.

Following the argument, Kim is explain to Jedward and other Housemates that James J tried to demean her because of her profession as a cleaner. She brings up his earlier comment about Jamie being a washed up footballer. “That’s what James Jordan does.” Kim is visibly upset.

In the garden Nicola, Jamie and James J laugh about the argument with Kim and Nicola says that Kim will head into the Jacuzzi if she comes outside to continue their argument. They all laugh as Nicola adds: “She looks like Miss Trunchbull from Matilda, she might swing me by my hair.” James J is annoyed that Kim called him a ‘fat slob’: “What’s wrong with me saying go do some washing up.”