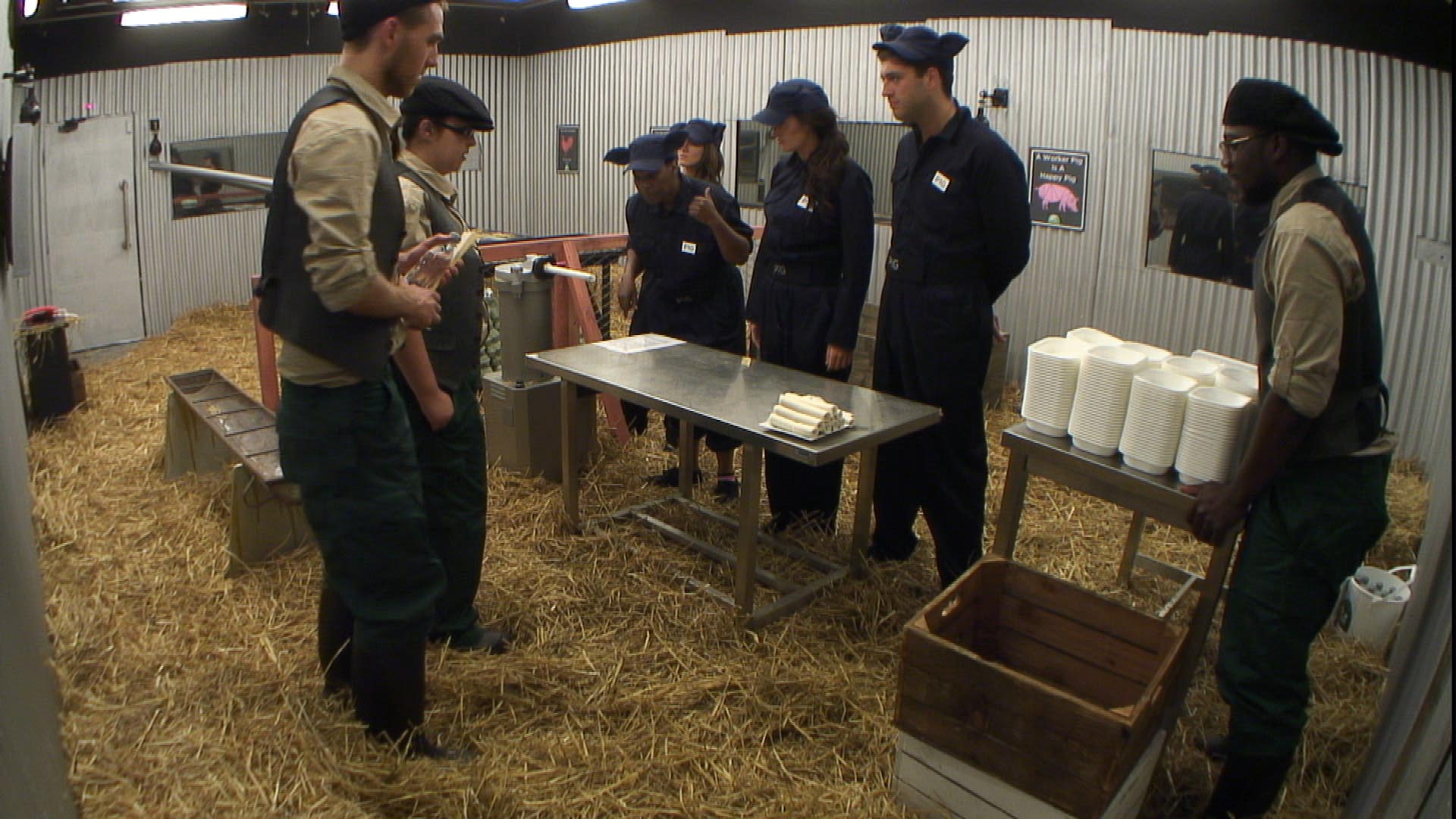 The House was converted into a working farm with the aim of making a profit. JALE, CHRISTOPHER and MARLON became farmers and had to make cost saving decisions based on the welfare Vs cost margin of their animals. To pass, Farmers must meet or exceed a predetermined target profit which is sealed inside a locked milk urn from the top.

The Farmers decided which Housemates should be Pigs, Cows and Chickens.

Each set of the animals completed one shift today.

SHIFT 1:
The Pigs were had the first shift, where they had to create sausages and the MARLON the farmer had to package their product. PAULINE and KIMBERLY minced the sausage meat with their feet while HELEN and STEVEN made the sausages.

The Pigs managed to make 30 units of sausages.

The Chickens had the second shift where they had to pass eggs down a line with their mouths and fill the egg crates. Six eggs equalled 1 unit and JALE was the farmer.

SHIFT 3:
The Cows did the final shift where they had to make whipped cream and Farmer CHRISTOPHER had to put whipped cream on top of cakes and finish with a cherry on top.

Reclaimed Meat Factory Quiz
The farmers JALE, MARLON and CHRISTOPHER had to decide which animal from each group wasn’t pulling their weight. To be sent to the Meat Reclamation Factory.

For every correct answer an animal gives he or she will receive money towards the profit. If they are incorrect, they will be squirted with “pig’s blood” will be squirted from a spout facing them in the middle of the table.

– Of the Housemates facing eviction this week. Who’s bacon would you most like to save and see stay on Friday?

– Which of your Housemates is the most greedy pig?

– Which of your Housemates would you say is the biggest chicken?

– Which of your Housemates is the biggest wimp – the most henpecked?

– Which of your housemates do you think is the biggest attention hogger?

– Who is the laziest animal?

None of the animals answered correctly.

As the animal answered most of the questions correctly they received £50.00 towards their goal and a takeaway for the house.