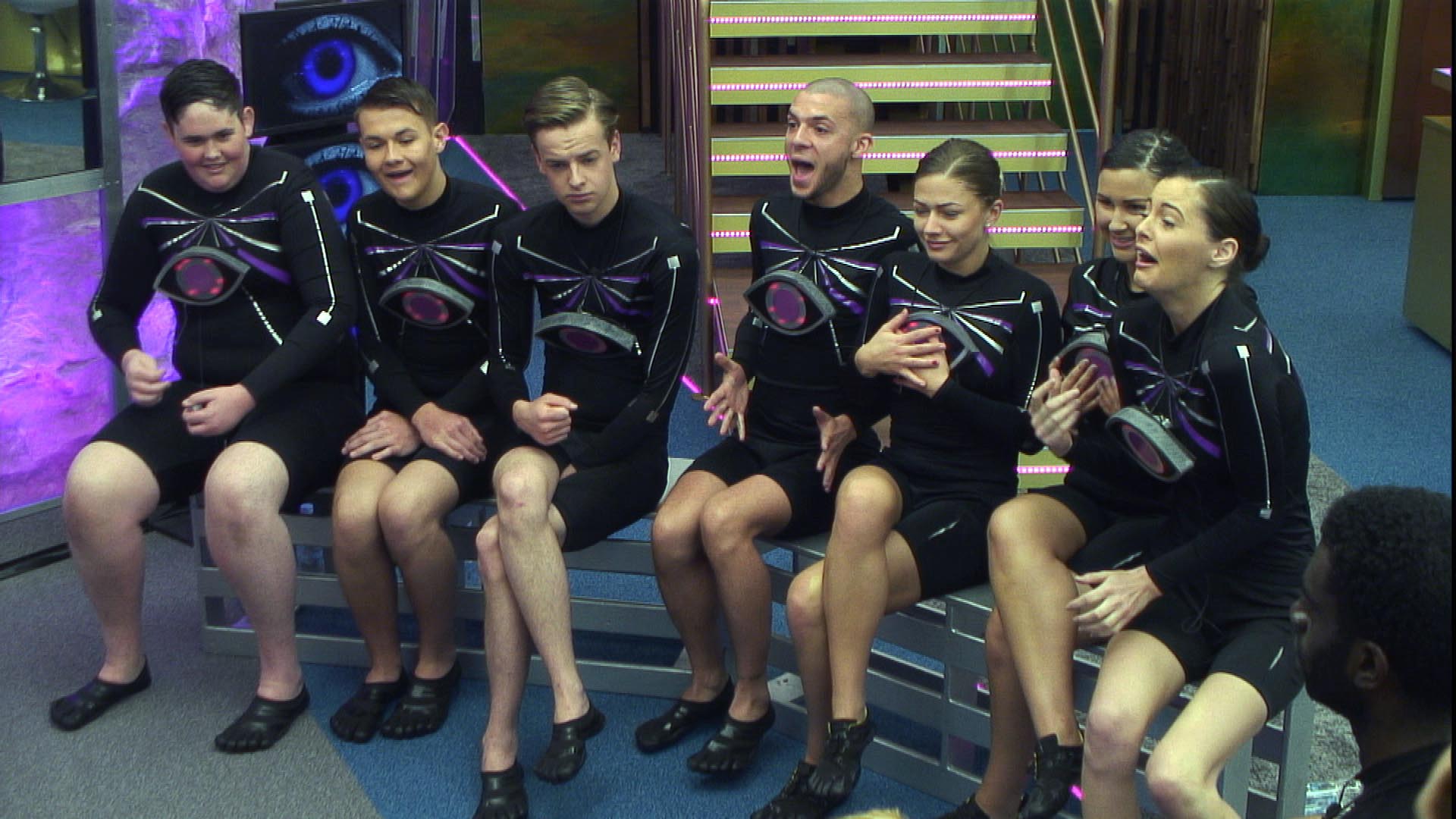 Find out what the Housemates face in tonight’s highlights show

Today, the housemates begin this week’s shopping task. Big Brother has transported the house to the year 2050. The house has been made futuristic. Appliances have been removed and the housemates must wear uniforms. Kieran comments on the uniforms, “You do feel like a superhero when you’ve got these on.” A super-computerised version of Big Brother, called Big Bot, has been installed in the living area and is responsible for tasks, experiments and punishments in the year 2050. Big Bot tells the housemates that the aim of all the tasks, over the next two days, is to gain time in the ‘Time Room’, where they can be transported back to 2015 to win their luxury shopping list. The housemates’ outfits will also have a vibrating chest piece, which is Big Bot’s recall button.

In the first task is a telepathy task as Housemates of the future will be able to read each others’ minds. All housemates except Sarah, Joel and Jack gather in the living area where they are asked a number of questions relating to one another. These housemates must cast a vote independently without communicating with each other. Sarah, Jack and Joel are in the Diary Room. They must guess the majority answer to come from the other housemates.

• The first question is, “Which housemate is most likely to sleep with someone on the first date?” Sarah, Jackand Joel correctly guess that the majority of the housemates voted for Aaron. Jack comments, “He’s always twerking on the bed.”

• The second question is, “Who’s most likely to take the prize money leaving the winner with none?” Sarah, Jack and Joel correctly guess Joel.

• The third question is, “Which housemate is most likely to think they are better than everyone else?” Sarah, Joel and Jack deliberate between Jade and Cristian. They vote Jade. This is incorrect. The answer is Cristian. Kieran tries to comfort Jade but she responds, “Babe, I’ve had better people say worse things to me so trust me, I can take it.”

• The fourth question is, “Which housemate will be the least successful in life?” Jack and Joel vote Nick. Sarahresponds, “There’s no way would I vote Nick.” They guess Nick. This is correct.

• The last question is, “Who would you evict right now?” Sarah, Jade and Joel must guess which two housemates have drawn. They guess Joel and Jade. This is correct.

Big Brother informs housemates that they should have passed the task but because the housemates in the living room failed to be silent, they have broken the rules and have in fact failed.

The second task is based on three chosen housemates tasting flavours. Chloe, Aaron and Eileen are sitting at a table and will each be given a separate task. Chloe goes first. She is asked to taste three different foods that look like one item but the flavours have been altered. Firstly, she is asked to taste pineapple which is flavoured like curry. She guesses correctly. Then she tries a garlic flavoured blue banana. She guesses fish. This is incorrect. Lastly she tries black scrambled eggs and correctly guesses liquorice.

Eileen’s task is to taste six lollipops and guess their flavours. She guesses each lollipop incorrectly except for the last one when she guesses “chilli” correctly.

Aaron’s task is to eat three food items. He will be given a choice of three sources of protein for each item and must guess which is correct. Firstly, he eats a burger. The choices; rat feet, water- bugs or snake’s meat. He guesses snake’s meat. This is incorrect. Aaron has eaten a water bug burger. Then he is told to drink the milkshake. He must drink the entire glass. The three choices are; fish eyeballs, snail’s guts or cow’s urine. He correctly guesses snail’s guts. Lastly he takes a bite of cookie. His choices are; flies, giant ants or rat droppings. He guesses flies. This is incorrect. Aaron has eaten a giant ant cookie. The housemates have failed the second task.

Day 16: Four Housemates to be evicted and replaced on Friday