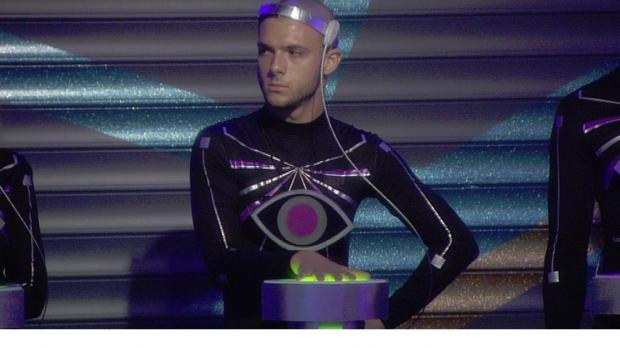 Tonight on Big Brother: Timebomb, the clock is fast forwarded into the year 2050 and our housemates better prepare for what Big Brother has in store for them.

Eileen and Jade’s beef continues. Nick and Jade picked over the bones in the garden and he advised her to try and be “neutral”. Not the word we’d use for Jade. Anyway, she had a theory for the source of Eileen’s wrath: “She can’t take my mental capacity.”

Time, then, for another installment in the Shopping Task: Big Bot wanted to test the housemates’ capacity for telepathy. Could they guess each other’s thoughts? If you can’t intuit the answer, you’re clearly not up to scratch.

Joel put Jade on the spot and asked if she’d sacrifice herself for Nick in an eviction. Nick piped up to say he wouldn’t sacrifice himself for her. So it’s nice to see they’re still getting on famously.

Then, more Shopping Task action. Chloe didn’t recognise the ingredient injected into her banana – and thank goodness for that – while Aaron failed to identify the taste of his mysterious cookies. But it was Eileen who made a splash, licking her lolly in a most seductive manner (well, that’s what she thought, anyway).

Eileen received ANOTHER pasting, this time from Aaron. He told Danny and Sarah that he found Eileen’s lolly-licking a bit much. Yes, this from a man who dishes out twerking lessons in the bedroom.

Stay tuned right here on Big Brother 24/7 as the results for the shopping task are revealed!

Day 15: Tonight: Time Runs Out For Luxury and Jade?