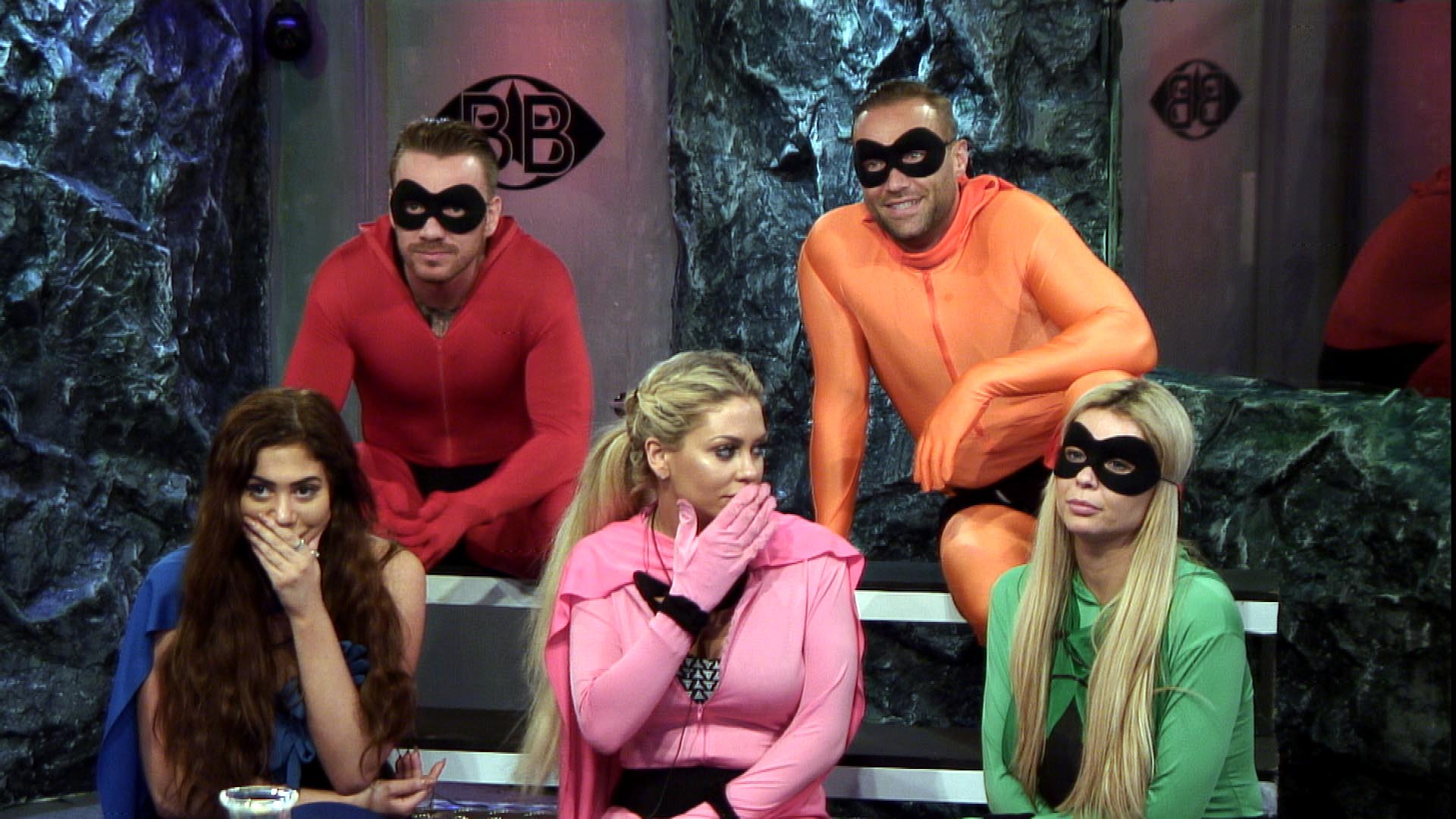 The Housemates have become heroes as part of the latest shopping task!

For this week’s shopping task, housemates will be attending Big Brother’s hero training camp. Housemates will be split into heroes and their sidekicks. Sidekicks have to cater to their heroes every need and complete gruelling tests to show their loyalty

James C is in the diary room talking to Big Brother; “I’m a serious man, my position is that I would find it very demeaning to wear that. I wouldn’t wish my family or my friends to see me dressed like that. I’m very sorry about my decision, as it will impact the rest of the house. I am not going to wear the costume.” Big Brother announces to the house that although James C will be taking part in the task, he has refused to wear his costume. As this is a breach of the rules, hot water will be turned off.

As part of the task, whenever Big Brother plays hero music into the house, housemates must rush to their podiums in the garden and strike their hero pose. Each hero is given a sidekick who must declare their loyalty by giving their hero compliments.

As part of the shopping task, sidekicks must perform all chores for their heroes.

Hero music is played into the house, housemates rush to their podiums in the garden and strike their hero pose. The sidekicks compliment their heroes Jamie O’HAHA compliments his hero Notorious Nolan; “When I watch you on Loose Women, by far you are the best of a bad bunch!”

As part of the task, sidekicks Jamie O’HAHA, Colonel Cosmo, The Not So Best Man and Bianca the Bold will be learning to fly in Big Brother’s flight simulator. These sidekicks will face buckets of revolting ingredients being thrown over them by their heroes; their aim is to continue flying through different environments

In the bedroom, Chloe tells Jessica that she and Calum have kissed on the lips. Chloe believes; “It’s a big deal.”

As part of the task, the sidekicks visit the science laboratory. Heroes must ask their sidekicks probing questions to get the truth out of them. If the sidekicks answer these questions truthfully to Big Brother’s satisfaction, they will pass this part of the task. Chloe is asked by her hero if she was really offended by Jessica fancying Calum, she replies; “Yes! Because I thought she was my friend and I really fancy Calum.”

Calum is asked by his hero Kim if he has a crush on her, he replies; “Unfortunately not! There is no crush there.” He calls Chloe ‘bae’, she smiles

James C reveals that he finds Kim irritates him the most; “I don’t think she’s come in with the right attitude.”

Jamie’s hero asks him; “Do you have feelings for anyone in the house?” He reveals; “I’m starting to get very strong feelings for Bianca.” The pair hug. Housemates successfully pass this part of the task

In the living area, Jessica is tearful about Chloe’s comments about her during the task; “I thought she was my friend…” Spencer tells her; “You’ve no real loyalty to not flirt with Calum, she didn’t call him, it’s not her possession.” Coleen reminds Jessica; “You’ve not stolen her boyfriend! He’s single!”

Chloe and Jessica are talking in the toilet, Chloe says; “I do see you as a good friend. You’re making it a big deal! He’s not me boyfriend! You are overeating. I don’t care if you flirt!” They agree to forget about it and leave the toilet smiling

On the sofas, Chloe tries to kiss Calum, he tells her; “That’s enough!” She states; “I nearly went in for a kiss but I though nah!” They laugh

Kim and Jessica are talking in the smoking area and agree to meet up on the outside. Kim says; “I’m taking you to dinner! When you make your money you can (take me for dinner), when you make a lot of money you can treat me!”

Calum tells Bianca and Jamie that Chloe went in for a kiss. Chloe comes out of the bedroom in a bikini and gives John a lap dance. Housemates cheer and John is left laughing. Spencer advises Chloe to ‘turn it up’ with Calum

In bedroom, Calum is in his bed. Chloe wants to share his bed, he tells her; “Just chill Chlo! We’ll have a flirt tomorrow…you’re a beautiful young girl and I enjoyed your company tonight. Chloe go to bed.” Chloe goes to her bed and mutters; “Nothing will happen, I don’t care…”

Day 17: Kim returns to the house after huge row