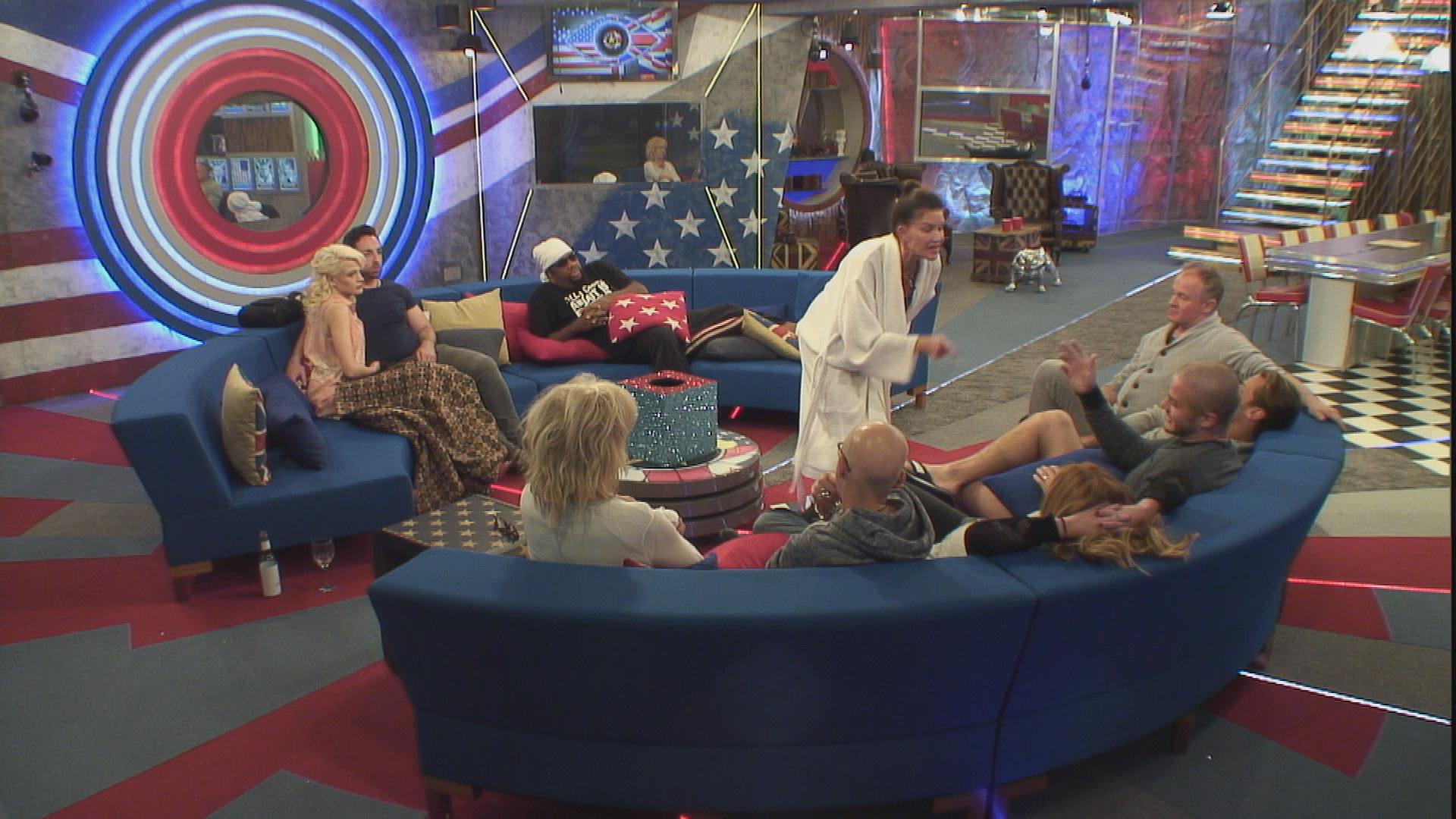 Get all the spoilers from tonight’s highlights show…

Jenna and Farrah are discussing how happy they are to be in the luxury suite. Farrah ‘I am so thankful. I think I’m still in shock.’

· Austin and Scoop are discussing Jenna and Farrah’s eviction, Austin ‘I was really happy and relieved to be honest.’ Scoop ‘Was it that bad for you bro?’ Austin ‘No, but it’s better…This is just in regards to Farrah, not Jenna at all…I was uncomfortable any time Farrah was in the room…she disrespected everybody. She would make these underhand comments that were negative..she’s just an awful b***h.’

· Gail talks to Big Brother in the Diary Room ‘I think the dynamics are going to be very different in the house. There is a lot of people that are going to chill and relax and there’s not going to be so much tension because the one thing about is Farrah says what she felt, fair play to her but when she did it could be quite venomous as you’ve probably seen. For me personally I am kind of enjoying the calm because it could kick off at any time. This is getting interesting. And this is going to be fun now.’

· Jenna and Farrah are discussing Chloe-Jasmine as they watch her in the smoking area. Jenna ‘Why is she wearing my shirt? She smokes so weird. She is so freaking odd.’

· Stevi tells Sherrie he has learnt from the sacrifice task that he and Chloe-Jasmine do not need to be around each other 24/7. Sherrie tells him ‘She was really struggling, but she has to know that she has to be on her own and be strong…It does strengthen you.’ In the secret luxury suite Jenna is exasperated by their conversation.

· James tells Natasha in the kitchen that he had a terrible night sleep and that he will have to have a night without Austin in bed. Natasha tells him to ‘give him some warning…he’ll be quite upset when you tell him that…or you could just wait until he falls asleep get in the other bed and then make sure you wake up before he does and get back in.’

· Jenna and Farrah make their second nomination in the diary room ‘We nominate Natasha.’ Farrah ‘We would like to nominate Natasha for eviction due to her lying behaviour.’ Jenna ‘And that’s not the only thing, I mean watching her after our ‘evictions’, she was so cruel and rude and nasty. Her and I just became cool again and she told me nice things again and boom, flipped like the moment we walked out. We do not backstab people.’ Farrah ‘I am happy we tried to do the right things and it’s sad that Natasha is a f***ing liar.’

· The Housemates must compete in ‘Celebrity Show Offs’ for their next task. The Housemates believe their performances are being judged by viewers watching online. However it is actually down to Jenna and Farrah. They will choose the most and least talented Housemate.

· Gail is the host of ‘Celebrity Show Offs’. Natasha is the first up and sings Atomic Kitten’s hit Whole Again. Farrah ‘I don’t know I’m not feeling it.’ Jenna ‘She can sing…good thing she has some talent because her personality is f***ing s**t.’

· James has to give a speech about his career in entrepreneurship. Chloe-Jasmine and Stevi sing the Dirty Dancing duet Time of My Life. Jenna ‘This is actually really terrible…This is a train wreck…they need to be voted off just because of this.’

· Austin walks a catwalk; Sherrie recites from Shakespeare’s Hamlet in different moods; Janice gives her life story; Bobby does impressions of this year’s Housemates; Scoop is the final contestant and raps to his Be Faithful hit.

· Jenna and Farrah vote Scoop as the most talented and Bobby as the least talented.

· Jenna is talking to Farrah about Bobby’s performance ‘I feel sorry for his family. I would be ashamed. That’s all he could think to describe me?…to put a pillow in his f***ing butt? I think I’m a little bit more well-rounded than that. Ha-ha’.

· The results of the ‘Celebrity Show Offs’ task is revealed to the house. Bobby is told he will be punished as he is the least talented Housemate. He has to wear a helmet that labels him as ‘talentless’. Austin tells him ‘well at least if you’re sleep walking and you fall you’ll be alright now.’

· Bobby is talking to Big Brother in the Diary Room ‘I am a little bit wicked when I do my impressions but that is me. (on being asked why he was voted least talented) Oh I don’t know because the impressions were dreadful and I can’t say I do the best impressions of my fellow teammates. My ‘Jenna’, she will probably hate me now’

· Natasha is in the garden with Bobby, James and Sherrie ‘I think the girls are here.’ Sherrie says ‘In another room, with a television camera, judging?’ James says ‘That’s because you had the rows with them.’ Jenna ‘Natasha is smart, she is smart.’ Natasha says ‘Maybe it was them who had to vote on the most and least talented…I’m either a bloody genius or totally paranoid.’

· Big Brother treats Jenna and Farrah to a massage in the luxury suite ‘Oh I love them…they are so awesome’.
· The rest of the Housemates are gathered on the sofa area. Then Big Brother reveals the secret that Jenna and Farrah are in the Secret Luxury Suite. Some of their comments from the last 24hrs are played in to the house on the plasma.
· James has been told to quietly read from a tablet to the rest of the Housemates. James ‘Housemates Farrah and Jenna are currently residing in the Big Brother Luxury Suite and have been secretly watching you all since Friday night casting their judgement. Big Brother has told Farrah and Jenna that they are living in secret but Big Brother has a surprise for you. This is in fact a fake fake eviction and the joke is on them. So far they have nominated Austin, Natasha and Bobby to face the public vote but what they don’t know, is that anyone they nominate will in fact receive immunity. This means that Austin Natasha and Bobby you are now immune. Over the next 24hrs Farrah and Jenna will make further nominations, and whoever they nominate will also be immune. It is up to you to get yourself nominated if you want to be safe. Big Brother will warn you when Farrah and Jenna are watching and this will be an opportunity to make Farrah and Jenna nominate you. Remember Housemates you are in control of your own destiny and the only way to save yourself is to disgrace yourself.’

· Chloe-Jasmine is talking to Stevi in the smoking area about the nomination twist ‘These people that are so prepared to stick knives in people’s backs to progress further – it makes me feel very despondent indeed.’

· Scoop and James are talking about the upcoming nominations task and he said he wants to stay true to himself. Scoop tells James he thinks that he (James) will be the final nomination from Jenna and Farrah.

· The Housemates are given a task to discuss moral dilemmas in the sofa area, they are aware they the Secret Housemates are watching. They need to be as outspoken as possible to be put up for eviction.

· Sherrie when asked Should you hide your honest opinions to keep the peace? answers ‘I believe if you have something to say about somebody you say it to their face, you don’t say it behind their back. You come to me tell me what you think and I’ll come straight back at you.’

· Natasha says ‘I think the Brits are more inclined to sit down and have a discussion but when you have got volatile people who you can’t converse with…then it becomes difficult and some people don’t want confrontation straight away.’ Jenna ‘We did have a level conversation and you still talk fake a** s**t with your f***ing McDonald’s eyebrows’.

· The next card is Can real fame be achieved through reality television? Austin ‘I’ve done reality, Janice has done reality, Farrah did reality. At the end of the day I have talents beyond a camera crew following me around doing my day to day life. Janice has an extremely broad massive career beyond…but if she (Farrah) would have been here today what would she have done exactly? You can’t mould your vagina on stage.’ Janice gets up and leaves the sofa area ‘Oh come on, that’s enough. I won’t listen to you discuss any woman like that alive. I’m sorry. I will not listen to s**t like that.’ Jenna ‘I’m famous because of my vagina…God bless my beautiful vagina.’

· Scoop is talking to James in the garden ‘I can tell you brother than halfway through that conversation your name was pressed for eviction. Your third comment they already picked you…In my good conscience I couldn’t do that.’
· Farrah and Jenna give their fourth nomination ‘James’. Farrah ‘I have no idea why everyone in this house is so obsessed with being a reality star but I will say this: I’m not. I know I’m great at it. And we know many many top business women were being very good at being..’ Jenna ‘Kim Kardashian, Paris Hilton’ Farrah ‘Good for them. So we would like to say f**k you James you are nothing, you’re up for nomination, do not belittle, do not change, do not alter what the facts are of being a reality star, a business person and entrepreneur b***h.’

· James is talking to Big Brother in the Diary Room about the big twist ‘I didn’t really enjoy having to be an ass in that discussion today and at the end of the day you know it is a game and if I want to survive then I’ve got to play it haven’t I. I expect there is going to be some serious heated discussions, arguments you know your bringing two people back in to the house that are volatile people. Especially Farrah she is very volatile and opinionated. Jenna is as she says sassy, if she is up for an argument she will stand her ground and her corner. I bet they are thinking you just wait until we come back. And I bet they’ve got loads to say. There is going to be as Scoop would say some legendary rows I’m sure coming. I’m pretty nervous to see what is going to go down in the next two days to be honest with you. It’s going to be pretty serious.’