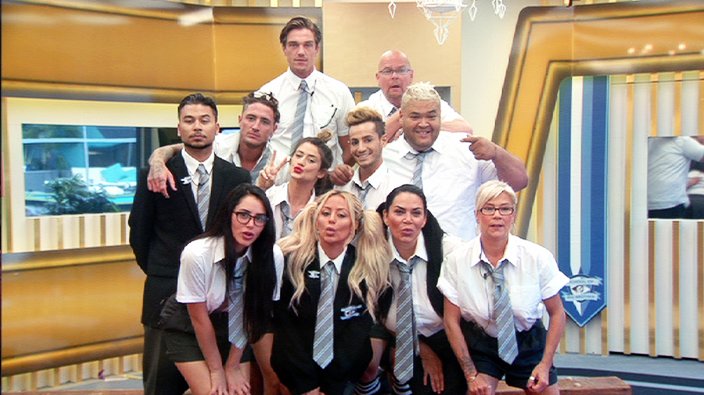 Day 19: Housemates go back to school in latest task

During tonight’s highlights show, Big Brother sends the celebrity housemates back to school…

As the show begins, Housemates wake up to music and dance round the bedroom. The celebrity Housemates are then given school uniforms to wear. Big Brother announces to the housemates that they must follow the rules and school activities and lessons, if they behave they will receive a reward and if they don’t, they will be disciplined

Aubrey and Ricky are Head Boy and Head Girl, Big Brother is the Headmaster. Aubrey and Ricky read out the rules, these include: no game cheating, clean up, no disruptive behaviour, listen when others speak, not to use the word BOOM.

Heavy D and Bear are first to break the school rules, the pair are sent to stand in the corner. The pair continues to break the rules. Bear spills coffee over the kitchen floor, and him and Heavy D shout out BOOM several times.

Headmaster Big Brother calls Bear to the Headmaster’s office – the diary room – to remind Bear of the rules. Bear cleans up the spilled coffee.

As part of task, housemates must paint a picture of the life models that are in the garden. Housemates each paint a picture, Bear is first to finish, while Aubrey and Ricky announce Bear as the winner, and also the most disruptive

For disrupting the art class, Bear is in detention

Big Brother throws the house a school disco. Music with the word BOOM is played into the house to try and entice the housemates to break the rules by shouting out BOOM. Heavy D breaks the rules by using the word BOOM, he’s called to the Headmaster’s office and told to wear the dunce hat and stand in a corner of living area

In the smoking area, Bear tells James that the house ‘needs controversy’; “I say one or two things to spark a massive argument…it’s a game in here!”.

Day 19: Lewis gets annoyed at Bear’s destroying the BB Yearbook