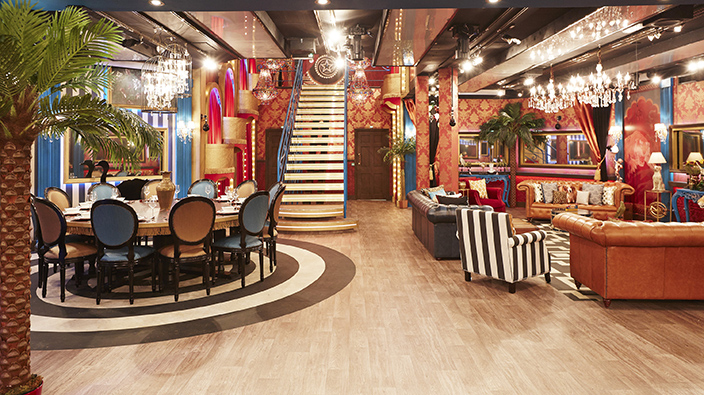 Channel 5 have today revealed the all new Celebrity Big Brother House, which starts on Tuesday January 5 at 9pm.

This time round the Big Brother House has been graced with a theatrical vaudeville theme, setting the mood for the all star line up entering Britain’s most famous house in the new year.

Big Brother has gone all out with the theme, with the celebrity housemates being greeted to a giraffe as they walk down the same staircase, as many stars before them. The walls padded with stage show curtains inspiring our housemates to give us a great show this winter.

Continuing with the open plan living space that has been present from the past few series, our housemates may be blinded by the all new cosy living area where a lot is going on aesthetically, with patterns and lights covering most of the room. Big Brother also thought palm trees and a tiger add that final touch of theatrical for our celebrities.

Walking into the kitchen, we get a contrast from vibrant to old school, we get taken down to the East End Pub, with bar stools to match.

Also situated next to the kitchen is a round table, which is surely going to cause a little bit of tension when it comes to post nominations.

The bedroom has been styled like a backstage dressing room with masks and faux fur cushions, we can only imagine the nerves the celebrities will feel when they are put centre stage and cast out of the house by you at home.

Heading into the bathroom, which has been given a apothecary theme, gives a very odd uneasy feel. Housemates will be greeted to a massive sign saying ‘Prescriptions’ and wall art ‘Do the spirits come back?’ Could evicted housemates come back and haunt those who chuck them out? This is a theatrical vaudeville series after all!

Finally, the garden has been transformed into the Victorian London era, with a murky pool, flower shop, and stone barrels making up garden. Stark seats have also been placed when the housemates feel like watching time pass by. However, they would be wise not to assume that their winter stay will be a lazy luxurious new year holiday. As ever, behind every mirror, multiple cameras will be tracing the housemates every move!

Let us know what you think of the new House by voting in our poll: