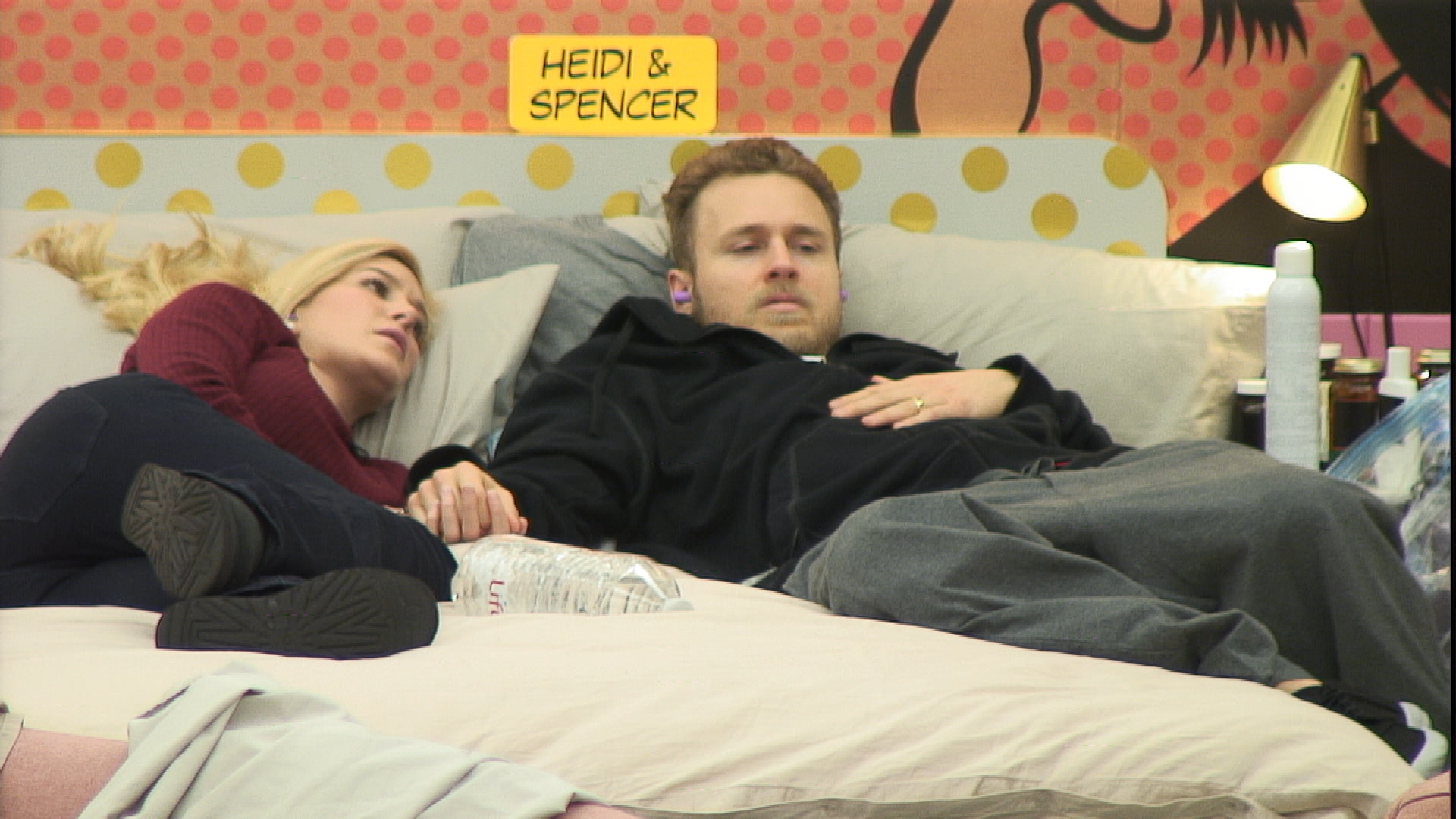 The House isn’t a happy place as arguments continue.

Following a row last night, Speidi are no longer talking to Nicola. Nicola tells Jamie: “The reality of it is, I’ve done nothing wrong.”

Jamie and Calum are in the bath together talking about Speidi. Jamie thinks Spencer and Heidi are using Nicola “as a reason to target” people. Spencer tells Heidi that Nicola is “more dead than Kim to me.”

Speidi are whispering in bed: “Next nomination put up Nicola and Coleen, everyone needs to be up for nomination.”

Nicola has come to the bedroom to talk to Spencer and Heidi. Nicola says that Speidi are the last people she would want to “hurt or offend.” Spencer says that Heidi can do “whatever,” but tells Nicola he was “done” with her as soon as she held Coleen’s picture up during nominations.

“However you feel, I need to let you know I f**ked up,” Nicola ends. Heidi says she “appreciates” Nicola coming to talk to them.

Calum and Nicola are discussing her earlier conversation with Speidi. Calum was present at the time and tells Nicola he was there to support her and thinks that Heidi may bring Spencer to a more “mellow place.” Nicola and Jessica are talking about the Speidi situation. Jessica tries to explain that emotions are high so “people don’t see the reality.”

Calum comes into the house and tries to lighten the mood. Nicola walks off and Calum tells Jessica that her “pep-talk” isn’t doing Nicola any good as other Housemate have already tried. Calum tells Jessica it doesn’t do any good explaining things when both she and Nicola are drunk. “Why bring up s**t that’s already been dealt with,” he adds.

Jamie tells Speidi that Nicola “f**king loves you,” which is why the situation is has affected her so badly. “No one is coming for her,” Heidi remarks.

Jessica is telling Bianca about her earlier conversation with Nicola and subsequent run-in with Calum. Calum enters the room and the girls stop talking. Calum explains to Bianca that Jessica and Nicola were both drunk and therefore “not in the right headspace,” to have that conversation. Jessica shakes her head while Calum is talking and he walks off mimicking her.

Most of the Housemates are getting ready for bed. Jamie, Coleen and Nicola are in the living area. Jamie notices that Nicola is upset and tells her to talk to him. “I’m done,” Nicola waves and heads to the smoking area. Jamie and Coleen follow. Coleen tells Jamie him that Nicola feels people have been “disloyal” by continuing to speak to Spencer and Heidi. Jamie says that is not the case and Nicola tells him: “Just so you know, I won’t sit with people that make people feel how I’ve felt.”