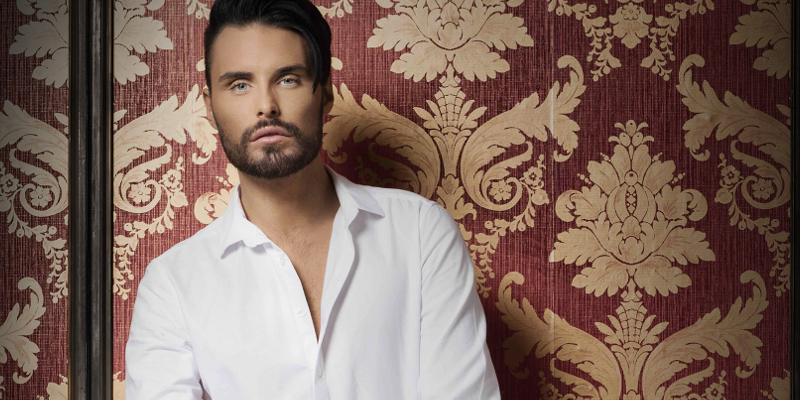 Are you starting to get excited yet, Rylan?

So excited. I love when all the rumours of the names start, and we see the house for the first time. It’s a brilliant time.

Can you tell us a bit about this year’s vaudeville theme?

The house is a lot sexier and more theatrical than usual. Exactly what you’d expect from vaudeville.  But the garden is the total opposite, it’s a smoky Whitechapel style street, which is a bit eerie.  I’d feel on edge in the garden.

How do you think the theme will affect the way the housemates behave?

The house will make them feel they are very much in a drama and that it’s time to act up.  Most of the houses over the years have been very modern, very plush, and quite homely.  This one does remind you that this is a show. The series is like a dress rehearsal and if you want to make it to the final which is the real deal, then you have to make sure your understudy doesn’t take over.  Launch night is going to be fantastic and it’s connected to the vaudeville theme.  As the years have gone on, they’ve got bigger and better and they really set the scene for the whole series.  This one is going to be brilliant. I can’t say any more than that!

What do you think of the rumoured names, such as Gemma Collins?

I think if Gemma goes in, she’ll  be exactly what everyone expects her to be: loud and opinionated!  I just hope she lasts longer in the house, if she goes in, than she did in the jungle.  They’re such different shows, though. There’s no way I’d ever do I’m A Celebrity. Big Brother’s the only one I’d ever do, so hopefully she’d be alright.

What about Angie Bowie?

Well, James Jordan was great! I’ve met Ola before and she’s one of the loveliest women I’ve ever met. So if she were to go in there, I think it would be a breath of fresh air for her.  She’s done Strictly for ten years, so long, so why not go in? We’d see a new side to her.

And what about Daniella Westbrook?

Daniella’s rumoured near-on every series.  I do think she’s a nice girl, to be fair, and I’d absolutely love to see her in there.  She’s had a life, she’s got a lot of backstory.  When she has her rants on Twitter, and some of the things she’s done, I would love nothing more to see what she’d be like in there.  Although she’s a brilliant actress, nobody can act for three weeks.  I’ve met her and she’s always been polite and down to earth, and that’s the sort of person I get on well with.  I’d like to think she’d change a lot of opinions if she went in there, but I don’t know her well enough to say whether she’d do that or just make things worse for herself.  That’s why I’d be keen to see her in there. She’d definitely have an interesting journey.

Do you think the lesser known names are just as good as the big names?

Oh my God, yeah! Our celeb booking team are amazing. They get it on the button every single time.  There are people who are put in there because they’ll get on with others; and there are people put in there because they won’t get on with the others.  And a lot of the time, it is never what we are expecting. But it’s always good.  You look at someone like Evander Holyfield, he was the biggest one in his series, and he said three words and left. You could put Kim Kardashian in there, and she could go in week one and be boring.  It doesn’t matter on Big Brother how big you are, anyone can dominate the series.  Casey Batchelor and Jasmine Waltz were like that.  Even Austin, from the last series, he was a great housemate, even though no-one knew who he was.

Which housemate has surprised you the most?

Perez Hilton. I was so looking forward to him going in. I thought he’d be fun, a laugh, I thought he’d spill a bit of gossip about people he knows in Hollywood.  Although he was a brilliant housemate, he wasn’t who I thought he was.  Katie Hopkins, as well. I speak as I find, and she’s only ever been nice to me when I’ve met her or worked with her on This Morning.  That’s what I love about this show. You get to see the real person, they can’t hide, even if they think they can.  It’s the only reality show that does record every single second of every single day. You’re never not on camera or without a microphone.  Things like I’m A Celebrity, when they’re going to a trial, they might reset the camera for a bit or give a briefing that’s not on camera.  But Big Brother, you see everything. That’s why it’s still going and why people still love it.

After the success of Chloe Jasmine and Stevi Ritchie, would you like to see more couples going into the house?

Definitely. It’s not the first time we’ve done it. There was Speidi in my year, for example.  It’s quite exciting. Going in as a couple will make or break you. And nine times out of ten, it breaks you!  A lot of people say, ‘They’ve got each other’ as if that makes it easier, but actually it means they’ve got each other to worry about as well as worrying about themselves.  It means you can’t be selfish.  To have someone else there, I can’t think of anything worse.

So you and your new husband Dan wouldn’t do well as a couple in there?

Both me and Dan have done Big Brother and we’ve both loved it.  But if we did it together, it would ruin our Big Brother experience!  There’s no way we could go in together.  We’d probably kill each other, but also if someone looked at him funny, I’d want to have a row. So I wouldn’t enjoy it.

What do you think Emma and Matt Willis would be like as housemates?

The thing is, for Emma and me, it’s a bit like a magician’s trick, presenting Big Brother. We know all the smoke and mirrors that go on.  We know where all the cameras are, how the doors lock, how it works as a TV set.  We’d be looking at the two-way mirrors and we’d know who was behind there!

Emma thinks Eamonn Holmes and Ruth Langsford would make good housemates. What do you think?

As my telly mum and dad on This Morning, I can tell you that I think they’d kill each other!  They would actually smother each other in their sleep.  They have rows on This Morning, never mind Big Brother!  We do usually chuck in Eamonn to do a task and he loves it. Ruth’s the opposite – she loves the show but she hates doing it herself.  I’d like to put them in for one day and night to see how they get on. Viewers would love it.

What’s been your favourite CBB romance?

It’s got to be the Lee, Casey and Jasmine triangle. We’ve never really had that on Big Brother before, a full-on relationship between three people.  I did love that. And it happened overnight. It was so juicy.

What’s been the most surprising moment on CBB?

I loved the relationship between Audley Harrison and Kellie Maloney.  Obviously Audley knew Kellie as Frank for years, then came face to face with Kellie.  For a big burly boxer, I’m sure that was hard to process, but there was one moment where Audley gave Kellie a cuddle and that was a really nice moment.  Audley had accepted the situation and that was lovely. You get some really unlikely friendships on Big Brother and that’s one of the joys of it.

Who would you most and least like to be stuck in the house with?

I’d most like to be in there with proper divas like Naomi Campbell, Kim Kardashian, Joan Collins.  I’d love to be there with all of them, then see them start rowing and ripping each other’s wigs off!  Least – there are so many names I could say right now!  But actually, nobody, because I’ve already proved I can cope with whoever they stick in there with me. Bring it on.

Congratulations on your wedding. How was it?

It was absolutely perfect. Emma was there, all my family and friends. It was just lovely.  We did actually have a Big Brother theme because obviously we met on the show.  So all the tables were named after different things from Big Brother.  I’ve got Big Brother to thank for getting married, because if it wasn’t for them, I would never have met Dan.

Really good! It’s a bit early to say if I feel different, because we just got back from honeymoon and hit the ground running with preparing for Big Brother, so we’ve not really had that much time to enjoy it yet.  But I do feel like I’m a grown up. It’s nice saying, ‘husband’, when I talk about Dan.