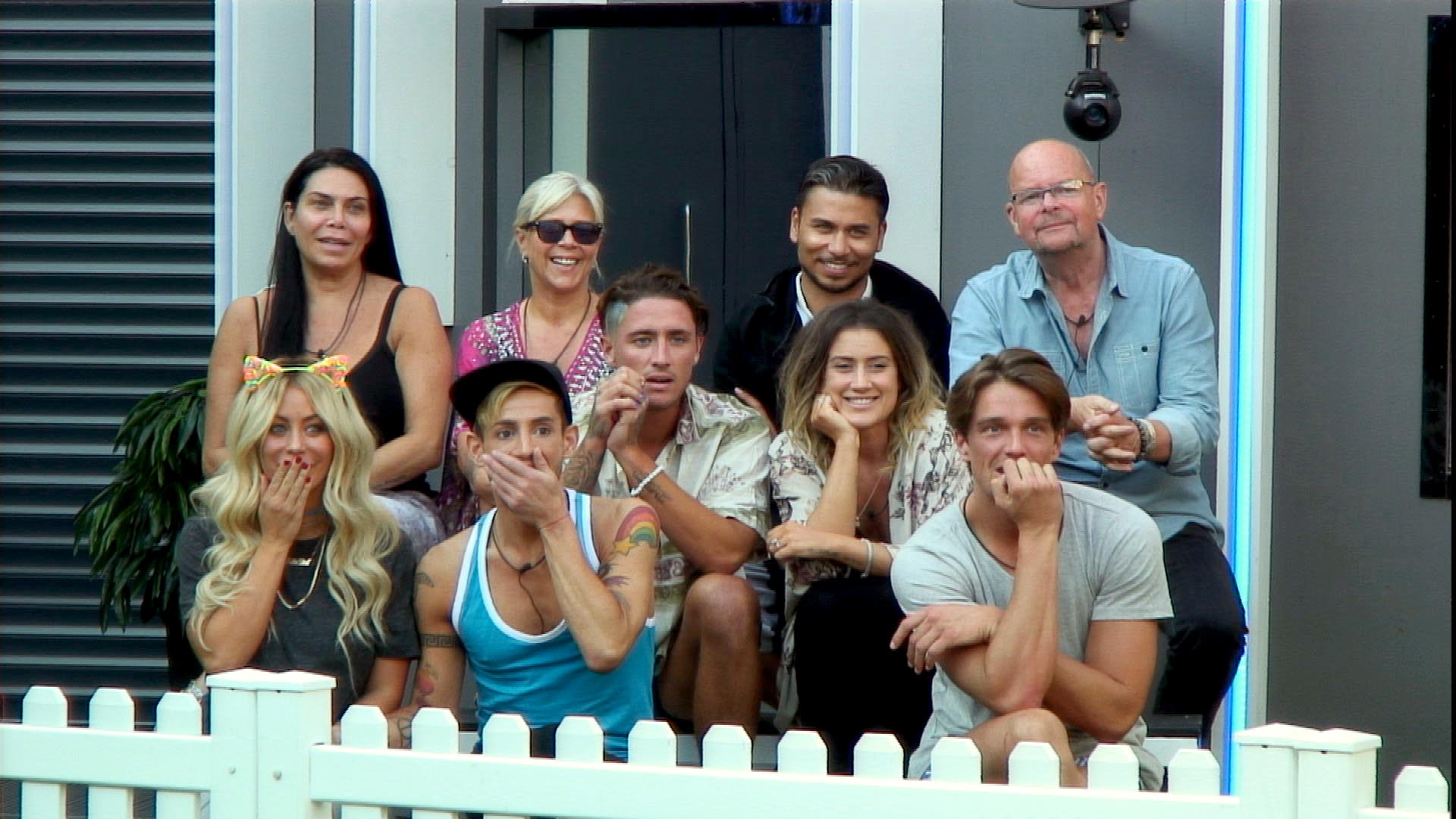 Samantha is in the diary room, talking to Big Brother; “Bear probably picked me [in nominations] as he finds me a threat, and he desperately wants to win.”

· In the garden, Bear jokes to some of his housemates about smashing eggs again. Frankie and Renee try to stop him, Bear then drops the eggs on the floor

· For this week’s shopping task, housemates will be undertaking a series of simple challenges while Big Brother throws a variety of distractions at them. Every housemate will take part in a challenge, and each housemate will be responsible for passing or failing that challenge. In order to win the luxury-shopping budget, housemates must equal or exceed the pre-determined pass total contained in a locked box in the living area.

· For the first challenge, Samantha, Bear and Renee must balance three doughnuts each on their heads. Each housemate is permitted to drop their doughnuts just once

· A male stripper enters the house to try and distract the housemates. Samantha drops her doughnuts once

· Next, Samantha’s mum enters the house. The pair hug, and the doughnuts fall off Samantha’s head; “Oh mum you’re so lovely, I miss you so much! Thank you Big Brother.” Finally, Bear is visited by Lexie. Take a look at what happened in our article here.

· In the bathroom, Lewis reveals to Marnie; “I owe it to myself to be a good person. People don’t think I’m the nice guy. I care what you and your family think about me, and my family think about us. I’m not worried! I know where my heart’s at. I’m doing well for myself, I’m in good shape, I’ve got a job, I’ve got a career path, I’ve got a five year plan! Woo! And you are part of it…plan number one!” Marnie adds; “We’re going to rule the world!”

· Frankie is entertaining some of his housemates in the garden by wearing the clothes of the stripper who earlier entered the house. He strips, housemates laugh, Katie shouts; “I’ve seen so many balls in this house!”

· In the bedroom, Renee tells Marnie that ‘everyone thinks Lewis talks about himself too much, and looks in the mirror’. Marnie says she’s ‘attracted to his confidence’

· For the next part of the task, Aubrey and Ricky watch a TV screen and must count sheep jumping over a fence. To distract Aubrey, a video message from her boyfriend Pauly D is played; “I love and I miss you so much, I can’t even put into words! I’ve cleaned your house, and took the babies (dogs) to the groomers. I’m counting down the days till you return! Respect us in the house! Missing you…Love you so much, I miss my person, my best friend, my wife.”

· To distract Ricky, a video message from his best friend Darren is played. He continues to count the sheep. Ricky passes the task and Aubrey fails

· For the next part of the shopping task, Marnie takes part in a memory task. Her cousin Sophie Kasaei is sent in to distract her; “I’m so proud of you! Everybody loves ya! Lewis, I like yous together. Keep up what you’re doing, you’re doing amazing. Frankie I know you’re looking after her! Whatever is going on between them (Lewis & Marnie), it’s real!” She also comments on having seen the size of Lewis’ penis. Marnie fails her part of the task

· In the bedroom, Ricky is talking to Renee about the scandal he was involved in while working on Eastenders; “There was a particular female that sold me out…I went into deep depression, I didn’t want to leave my house. I got suspended from my job for two months; I held my hands up. When it came to the end of the contract, it was end of the contract. Normally I’d get a renewal…I was happy…I was only supposed to be there for three months, I was there just under six years…”

· In the garden, Lewis reveals he’s ‘never had a celebrity girlfriend before’, Bear adds; “That’s the worst girlfriend you can have!” Bear believes that Lewis and Marnie will not last six months together

· Marnie is in the diary room; “Sophie said a few things, ‘that I know she doesn’t have many friends in here’…I thought I got on with everyone in here, that was a red alarm…maybe they’re not really my friends…I’ve noticed Renee and Aubrey they always give us negative advice on Lewis.” She adds; “Lewis does have an exceptionally large penis, but that is not the reason why I’m with him! ”

· In the smoking area, Ricky tells Bear; “That was serious, and I saw your heart sink. I know that feeling.” Bear adds; “It was horrible. I didn’t think I’d have to deal with that stuff in here…I’d love to see Chloe again.” Ricky concludes; “When you come out of here, reality will hit you.”

· Bear is talking to Big Brother in the diary room; “I’ve had a low day, I’ve tried to mask it. After seeing Lillie, that’s all I could think about. I just want to be by myself. I spoke to Rick a lot today; it was nice to speak to someone. No one actually really knows me in here. It was a f**king hard day.”

Day 23: Shopping task continues as the Housemates are distracted