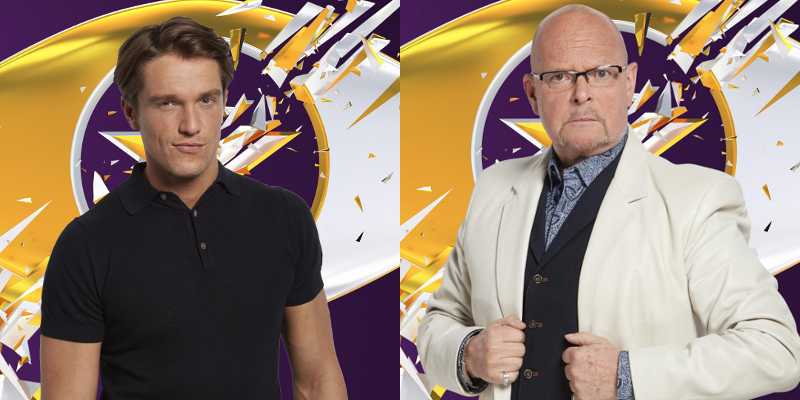 Lewis and James have fallen victim to the first double eviction of the series.

Since Wednesday, the public have been voting to save BEAR, JAMES, LEWIS, RICKY or SAMANTHA from the first DOUBLE eviction of the series.

During tonight’s 9pm Channel 5 programme, EMMA WILLIS announced live to the house that the person with the most votes, and therefore SAFE from eviction was RICKY.

A surprised RICKY was congratulated by his fellow Housemates as Emma made the shocked announcement that TWO Housemates would be evicted later tonight.

At the top of tonight’s second show, Emma informed Housemates that the British public have been voting to save; the two housemate with fewest votes and therefore FIFTH and Sixth to be evicted from the Big Brother house are LEWIS and JAMES.

The pair said their goodbyes and Lewis and told Marnie kissed and told one another that they loved each other. James and Lewis hugged as they left the House together and were greeted by mainly cheers from the crowd.

Emma interviewed the pair together and said they both “seemed genuinely happy” to be out.

Lewis on Marnie: ‘I’m gutted to leave her, this first time I wasn’t excited about an eviction, sometimes you just pick up on things, it was my time to go.”

Lewis on being nominated: “I wasn’t in there to perform, I was just being myself.”

On his ‘aggressive side,’ “If anyone goes from my girl…I’m protective of her.”

On Marnie and the supposed ‘showmance,’ “She loves me for who I am, she’s good stuff.”

James on Bear: “, I agree, he can be incredibly difficult in some cases, but I’ve had some great talks with him, he’s really switched on, if he can control the bits that go too far, I feel he can be an amazing asset.”

James on Aubrey: “We had long conversations, we talked about a lot about her man, politics, I wanted to shake it up a bit so I decided I’d put her up…she didn’t like it!”

James on throwing coffee over Bear: “I was not in a good place, I apologised immediately, I shouldn’t have done it but I wasn’t feeling myself.”

James on his take of the House: “I thought it would be the easiest money I’ve earned in life, I’ve cried been angry, talked to the birds, dressed as a woman….”

Day 23: Shopping task continues as the Housemates are distracted