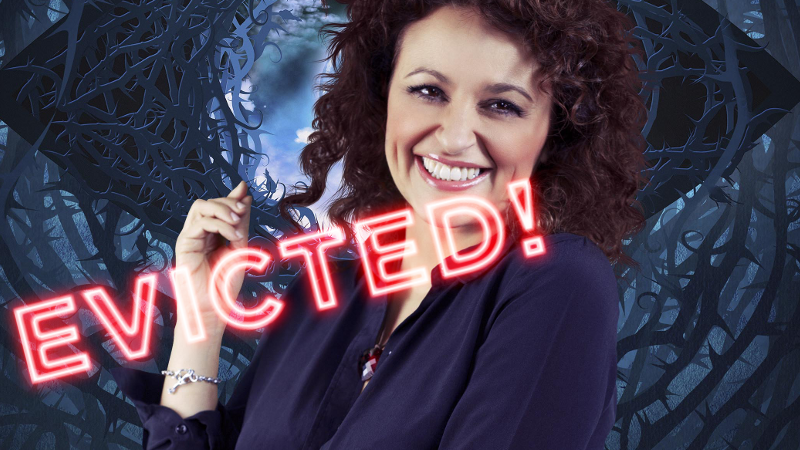 Nadia Sawalha has become the fourth Housemate to be evicted from Celebrity Big Brother 2015Nadia left the house to quite a lot of booing and started her interview with Emma, still clutching her toy rabbit, saying that she had employed some lucky charms to secure her eviction, wearing odd socks and wearing an outfit that her agent would hate.

Emma asked her if it bothered her she went into the house to cheers and came out to boos. Nadia answered: ‘I’m a very likeable, lovable person.’

She also mentioned that Big Brother had asked her what she would miss from the house and she sat in silence for five minutes. Nadia also revealed that she silently kissed all the people who had nominated her.

Emma told her that it seemed to get involved in a lot of the arguments in the house and she had adopted the role of peace-keeper in the house. Nadia said: ‘I didn’t want to have a role, I went in to have a laugh.’

Emma commented that Nadia did pay the price for her friendship with Perez and asked Nadia if she knew why the other housemates didn’t see in Perez what she saw. Nadia answered: ‘Some of them did, Katie Price, Keith.’ She also commented that some of the Housemates lost the courage to be his friend.

Emma asked Nadia what she thought of Katie Hopkins before she met her and she answered: ‘I thought she was a silly cow.’ Emma then asked if Nadia was surprised how popular Katie was in the house and Nadia said: ‘She did a campaign, she worked it.’

Nadia commented that ‘it was pretty horrible’ when Katie Hopkins had to be nice as a task at the start of the show and said she knew it was fake.

Emma ended the interview by asking who Nadia wanted to win and she answered: ‘Keith.’