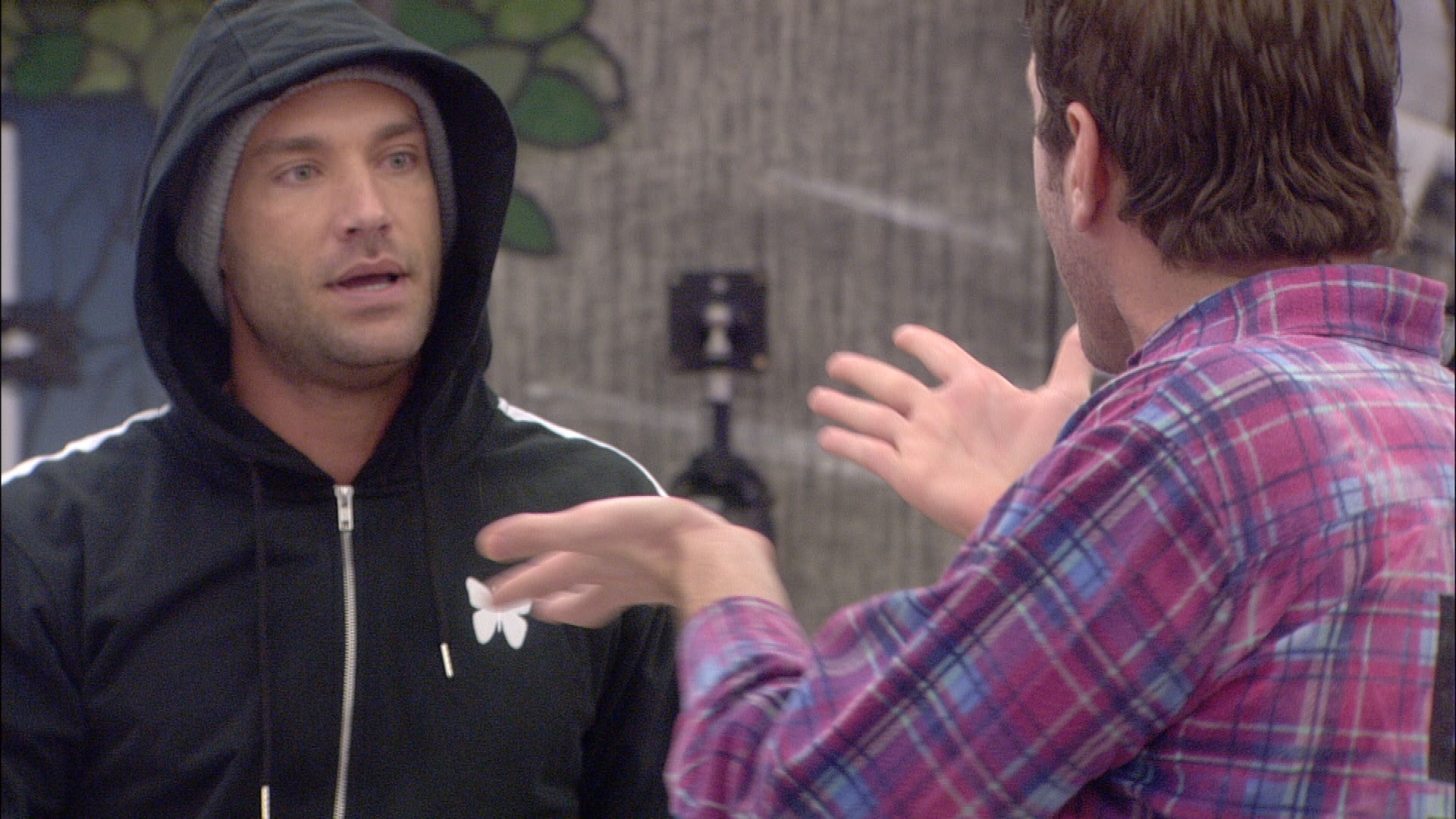 Calum and Perez clash tonight, following on from an argument between Keith and Katie Hopkins about Kavana. After the two have their argument, Keith rejoins the others in the kitchen and explains that Katie Hopkins is starting an argument based on a half heard private conversation. Calum tries to defuse the situation but Perez gets angry, bringing up an incident last night where Calum switched off the bedroom lights. Perez won’t let things drop causing Calum to say, “Be the di*k” before walking away. As he leaves, Perez shouts out, “I will do, I’ll be the huge di*k and I’ll shove it up your ar*e!” This clearly angers Calum who shouts, “You do not speak to me like that” and is followed into the bedroom by Cami-Li and Katie Hopkins. Calum maintains “I’m not losing my cool”, as he paces around the bedroom.

Perez and Keith are then seen in the kitchen. Perez remarks, “I’m just excited to get the fu*k out of here” and that “people get upset based on hearsay, not what they hear” He further suggests that Katie Hopkins was “riling people up” and “talking trash” about Kavana the previous evening. Keith observes that “there’s a heck of a divide between the two camps”

Calum tells Big Brother that he is feeling “pretty riled up” following Perez’s earlier comment and Big Brother assures him that the situation is being reviewed. Calum says that Perez is “lucky we’re in this place. I’m not an angry person and like to think I’ve stayed cool and calm…this morning, I’m wondering what that dude’s doing in this House. He’s so lucky that we’re in this House.” He goes on to add, “I can’t let one person, that’s a complete kn*b ruin it for me. What’s good for the goose is good for the gander and I’ve seen him get people kicked out for less than that. I’ve got no time for the guy. Shouldn’t be here. Causes problems, causes sh*t… Selfish, obnoxious, game player, not in my circle of friends, man. Fu*k that. He’s a nasty piece of work, old Perez. A nasty piece of work and I hope to see him go… He doesn’t deserve to stay here…He’s a piece of fu*king work, that guy. Absolute sh*t stirrer and a nasty person”

Perez is then reminded about the rules about unacceptable language and behaviour by Big Brother. After seeing video footage of his earlier remarks, Perez asks, “So which words were unacceptable?” He then maintains that he just repeated Calum’s “offensive” words and says that he “was speaking figuratively, not literally” adding, “if you want me to try and he’s open to it, I’m game to try.” As a result of his behaviour, Perez is issued with a final formal warning, to which he sarcastically replies, “Fabulous!”

In the bedroom, Housemates are discussing Perez. Calum says that he doesn’t want an apology and doesn’t want to speak to him. Michelle says that it “breaks my heart” that she has become enemies with Perez.

In the garden, Perez maintains that he was right to use his earlier language reasoning, “Calum called me a di*k. That’s why I responded using the same word in a more fabulous way”. Nadia advises that his behaviour stops people seeing other sides to his personality. She add that the thing that has most annoyed her is that “Hopkins has done a thing to get the House agitated and then all the spotlight was on you” Perez maintains that he doesn’t care if the other Housemates don’t like him.