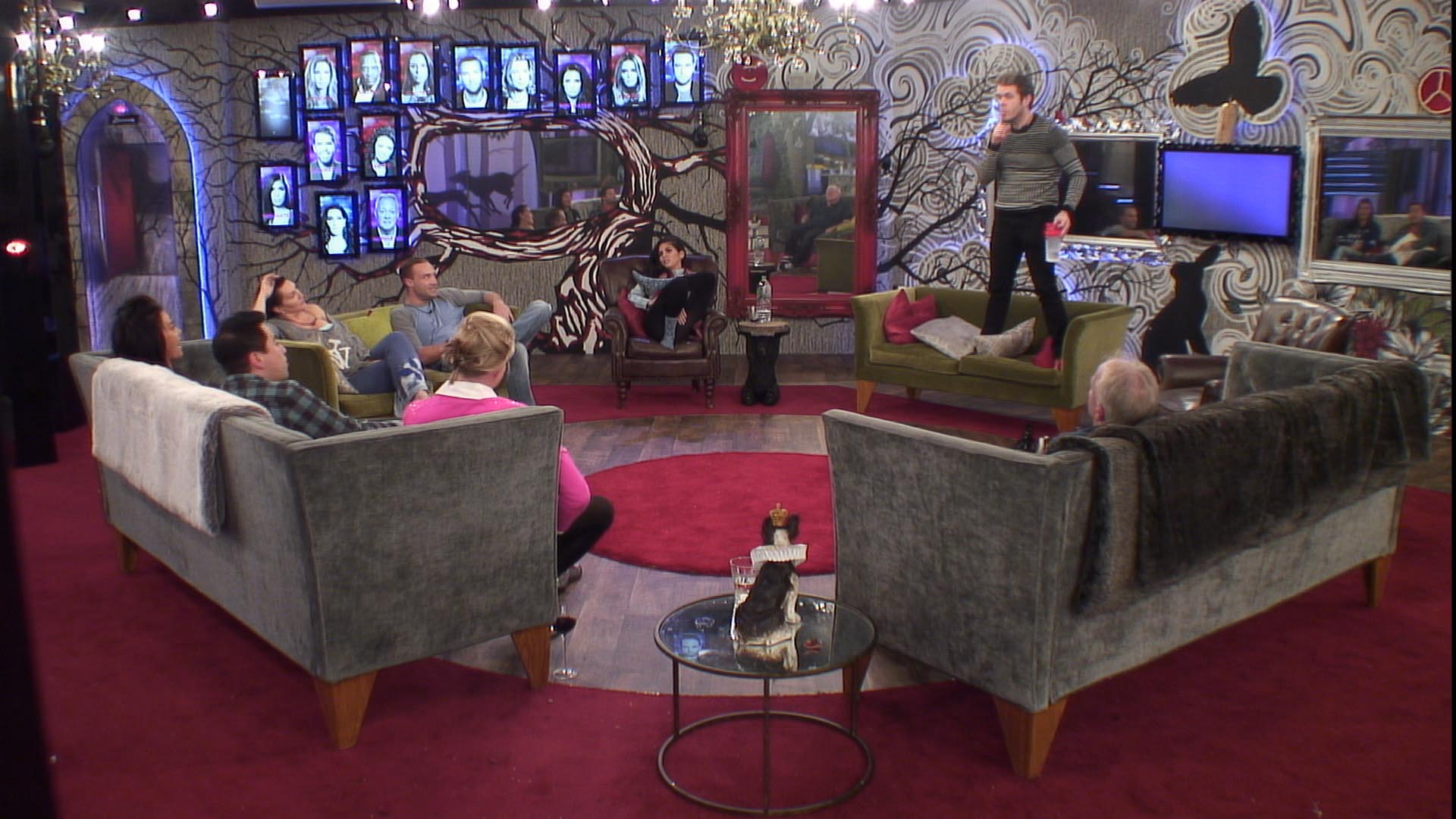 Day 28: Nominations cause tension between the Housemates

As Big Brother revealed the nominations, tensions grew between the Housemates

Big Brother gathers the Housemates to reveal the results of yesterday’s nominations. The nominations are played out on video screens, as the Housemates watch. Keith, Cami-Li and Katie Price all join eternally nominated Perez and will face eviction from the Celebrity Big Brother House. Katie Hopkins says that she thinks it’s better to see the nominations and Kavana speculates that there will be “more twists”

Kavana discusses the earlier nominations with Calum and Katie Price. He admits that he didn’t know who to choose and only picked Cami-Li because of yesterday’s letter task. He observes, “It doesn’t help now because obviously Keith’s in her ear” adding, “this is the game, this is what’s supposed to happen” Meanwhile, Keith tells Cami-Li “It’s an awful game” and suggests that he is not shocked by his nomination because you can’t permeate the group. Cami-Li admits that she thought she would be nominated, but didn’t know by whom. She then questions Kavana’s nomination and refers to it being “pi*sy and shi*y” that a friend could nominate her. In the living area, Michelle and Kavana comment to Katie Price that Keith won’t talk to them. Michelle further questions whether Keith is playing a game and they acknowledge that Cami-Li will take the nomination better than last time.

Emma then arrives in the big Brother House to screams from the Housemates. She informs them that Cami-Li is the fifth Housemate to be evicted from the Celebrity Big Brother House, and they leave immediately by a side door. As the other Housemates speculate whether it’s a real eviction, Perez states that he’s glad he nominated her. The conversations move on to what happens next which upsets Keith who says, “I can’t believe it. She’s just left and you’re all talking about your plans for other things. I feel incredibly sad. She’s a lovely girl and to be actually whisked out of a show just by the means of a door and not be given her hour of glory, I think that’s a real shame and I’m very upset by it.” Calum stands and questions what Keith said, before going to the kitchen. Keith follows and apologises, explaining that his words weren’t directed at him.

Keith then re-joins the group and Katie Hopkins asks if he nominated Cami-Li. He explains that he “did, for valid reasons” but Katie Hopkins retorts, “I’m not asking about your reasons, I’m asking if you nominated her…Don’t lecture us on morality, ‘oh isn’t it sad Cami-Li left’, when you’re the one that nominated her…you’re trying to own the moment of being sad. We’re all sad.” Keith defends his point and shouts, “Don’t tell me I’m thinking about morality, I’m just thinking about decency…Don’t fu*king turn round and tell me what to do!” Michelle reasons that Keith didn’t hear the full conversation and Calum acts as peacemaker and tries to smooth over the situation.

Perez is holding court in the Living Room and suggests that Emma “was so afraid of me!” Keith and Katie Hopkins are still arguing and he says, “I’m disappointed in the way she went out…don’t go off on your sobering, you are Miss God tack again.” Katie maintains that he nominated her so should “own nominating her”, and he responds that he is “disappointed” in her and she is “playing word games again.” Katie goes on to say that “Only my father can be disappointed in me, not Keith Chegwin.” Perez joins the conversation and says that he has been “disappointed repeatedly” by Katie, and that there can’t be any private conversations in the House. Perez accuses Katie and Keith of playing again, but Katie Hopkins maintains it’s a “genuine conversation.” Perez says that he “does not have one ounce of regret” about voting Cami-Li out of the House, and “I nominated her every single time… I’m glad I finally got my wish.”

Perez tells the other Housemates his view of the earlier eviction and insists Katie Hopkins is “playing all of you.” Calum asks why he has to make things so difficult and asks, “what’s your fu*king problem?” Perez replies, “I don’t even like you, I’m just living with you.” He then proceeds to analyse how Calum has been playing the game, saying he has “barely been here, very similar to Patsy but in a different way…You’ve barely shown any of your real side” and that he thinks Calum is “trying to play peacekeeper.” Perez goes on to say “what do we really know about you?” and adds that Katie Hopkins has made this comment in the past. Calum replies, “I am a genuine, honest chilled out person…nobody likes you because you act like a dic*head!” Calum goes on to say Perez has “72 different characters, and plays up to the ‘Perez Show’…and this is why no one in this country likes you.” When Perez responds, “you were never my mate”, Calum snaps “Shut the fu*k up you fu*king power tripper. You’re a piece of sh*t and nobody likes you! Don’t bother talking to me for the rest of the time, you cu*t!” Perez then gets up to follow Calum into the other room, “because I know that will pis* him off…I like the effect I have over him right now”. Michelle tries to smooth the situation.