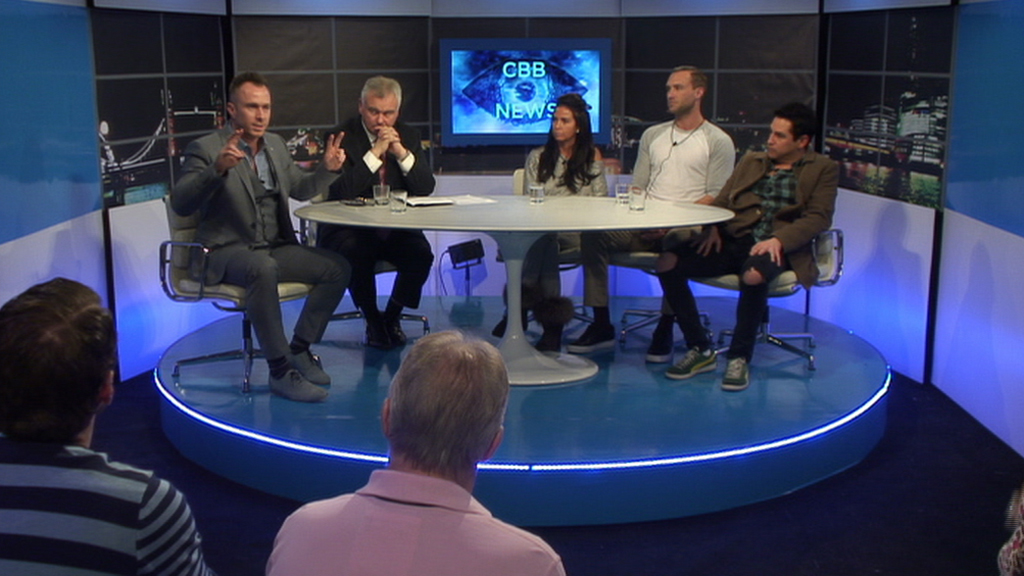 Today’s task saw our housemates rehearsing for life outside the House – by taking part in a tough-talking TV chat show hosted by Eamonn Holmes. Here are some of his hardest hitting questions:

Eamonn started as he meant to go on, by first asking Perez if he thought he was an angry man. Ouch. According to Perez, it’s all Big Brother’s fault, and in the real world he’s totally happy. So there we go.

“Has Katie Hopkins lost your trust?”

And the questions didn’t get easier from there, as Eamonn pointed out that Katie H. and Perez have seemed to be getting on lately, and questioned whether her other friends in the House – specifically, Michelle, Calum, and Kavana – could trust her in light of that. We’re biting our knuckles already.

There’s nothing Big Brother contestants like less than being accused of playing a game. Even though Big Brother is, technically, a game show. But Eamonn wasn’t afraid to rile up our celebs by asking them to their faces if they were, in fact, playing a game. (They said no.)

“Why don’t people just be honest?

All that talk of game-playing (and all those denials of said game-playing) made Eamonn a little exasperated. He wanted to know why people couldn’t just own up to their behaviour. They didn’t have a very good answer, as you’d expect. Oh dear.

“Have you done enough to earn your fee?”

Former Celebrity Big Brother housemate James Jordan joined Eamonn’s panel for this particularly touchy subject: are all the housemates pulling their weight? And will they all deserve their payday? As you might imagine, debate got… heated.

To add to the task, Housemates were joined by expert statistician Christan Howe who gave Housemates valuable information on how they’re performing on social media platforms outside of the House – breaking the no contact with the outside world rule once again.

You can catch this task tomorrow night on Channel 5.