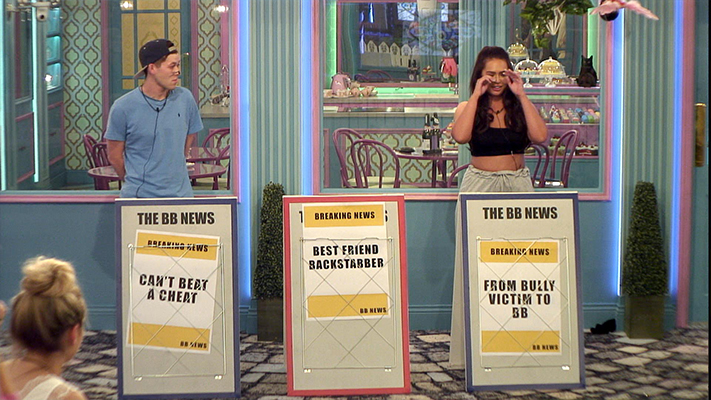 Day 3: Housemates face truths about themselves in first task

For the task, the citizens and exiles compete. Big Brother asks pairs from each team which salacious headline they think represents a housemate

Mandy’s correct headline is ‘sex tape shocker’, she reveals; “Charlotte’s father and I did a sex tape and then we split up! I was 7 stone 6 and I gave a great performance!” During the task, Chanelle explains she was ‘called ugly all through school’

Raph’s correct headline is ‘can’t beat a cheat’, he reveals; “I dated three girls in high school and each time I dated a girl, I cheated on her with a guy to explore what it felt like to be with a guy, nothing I can say to justify it.” Housemates are shocked

Imran’s correct headline is ‘benefits backlash’, he explains, “As you know, I was married at a young age and have been working my ass off. I’m sick of people making excuses. I’ve had to travel all over the country to find work. Get up off your ass and find some work!” Housemates cheer. In the garden, Raph is upset about how he will now be perceived following on from his cheating headline

Imran thinks his housemates are ‘good people’, Sukhvinder disagrees, ‘not everybody is good’ Lotan and Kieran are in the hot tub, Tom walks around the house with his bum out

In the bathroom, Arthur and Imran are having a disagreement, Arthur tells Imran; “My view on benefits is that you should take whatever you can. At the end of the day, if you got it you’ve got to flaunt it. There’s a system so play it.” Imran disagrees; “How can we progress if we just think about ourselves? We have to help each other.” Arthur thinks ‘it’s jealousy’. Imran says; “It’s not about jealousy, it’s humanity. You think it’s OK to exploit the Welfare State? I disagree with that.” Hannah and Sukhvinder reveal to Mandy that her sex tape headline shocked them.

Day 3: Ellie and Lotan get closer and Sukhivinder isn’t happy with the House