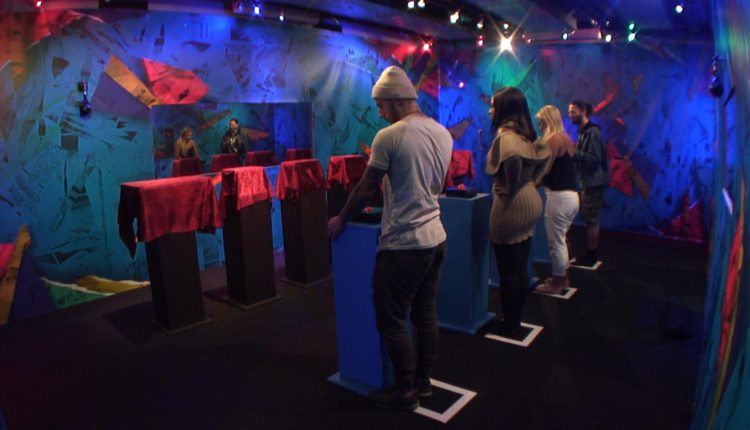 Day 30: Housemates face their fears in the latest task

During tonight’s highlights, the housemates are forced to face their fears as Big Brother puts some creepy tasks into the House. As well as that, Ellie and Sam are given a terrible spray tan and the Housemates are grilled by the Big Brother’s Bit on the Side audience.

Big Brother wakes up the housemates by playing a loud alarm into the Big Brother house. Housemates are gathered on the sofas for details of this week’s shopping task. Over the next few days, housemates will be facing their phobias and dealing with home truths

Ellie and Sam are called to the Survival Task room. Sam receives a green spray tan and Ellie receives a blue spray tan. On the sofas, some of the housemates are talking about the prize fund, Simone sates; “What’s 15 grand?! It’s nowt…if I want money I can get it like that through modelling. Money’s no object.”

Ellie and Sam shock their housemates with their spray tans, Hannah shrieks; “I’m scared!” Deborah reveals Hannah has a phobia of clowns

Hannah is in the diary room talking to Big Brother; “It’s so scary! Ellie looks like a Smurf and I’m scared of Smurfs. I’m forgetting that she’s a human…she’s so blue!”

Housemates are gathered on the sofas. Big Brother punishes the whole house for talking about what was said in The Void and for generally disobeying Big Brother. Tom gets a particular mention for calling Big Brother a ‘f*cking d*ckhead’. Big Brother confirms that electrical appliances will not be switched on, the hot water will be turned off and all fake tan products will be removed from the house, Isabelle reacts; “That really takes the p*ss!”

Tom, Charlotte, Deborah and Andrew are called to the Survival Task room which has been filled with their worst creepy crawlies fears.

For the next part of the task, Joe, Hannah, Isabelle and Chanelle link up with Rylan and the BOTS panel and audience, for a grilling about their activity in the house – SHOWN ON BOTS LAST NIGHT

In the diary room, Sam is talking about Ellie; “We’re just having a laugh, a flirty banter, flanter! She seems a lot more happy since I’ve been in here. I’ll kiss her a few more times…” Ellie reveals to Simone about Sam; “I think he’s lovely…I’m not ready to settle down…I do genuinely like the guy.”

Housemates are playing spin the bottle. Deborah states she would take the prize fund if she were offered it now; “I have a child and a family, I came for the experience but also to look after my family.” Joe applauds Deborah’s answer and Raph states; “She’s not here for the money!” Joe replies to him; “It’s got f**k all to do with you!”

Day 30: Joe explodes in a row with Andrew over his friendship with Raph