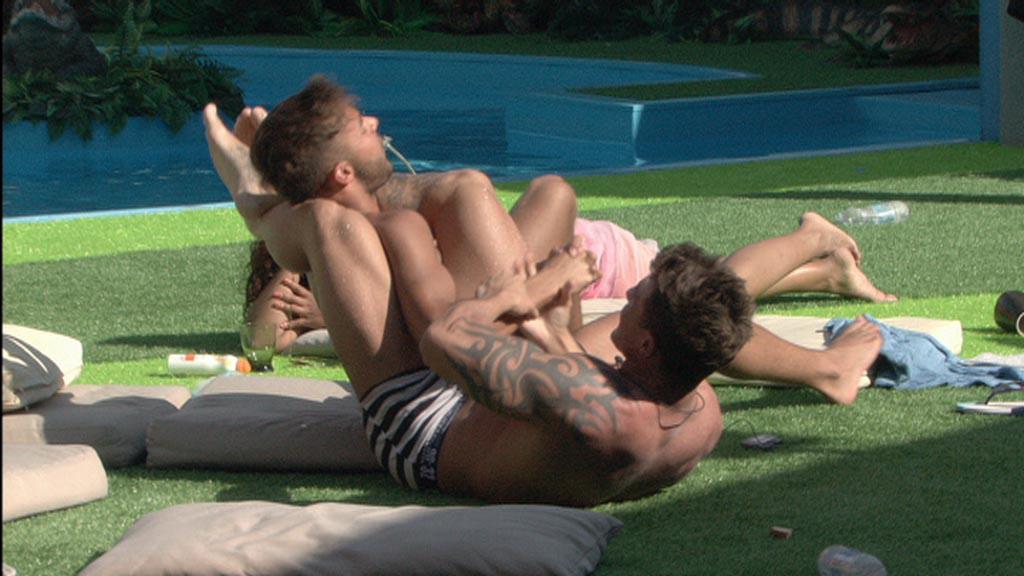 Find out what is happening during tonight’s highlights show…

Jade and Cristian are talking in the bedroom about being hungover. Jade says, “I regret stuff.” When Cristian asks what she replies, “Telling everyone I fancied Marc when I was 18. I don’t find him attractive anymore.”

· Sam is in the Diary Room talking about the eviction. “Tomorrow’s the big eviction and I think we’re all preparing ourselves to leave. I would dread having boos but I’m not going to be everyone’s cup of tea.”

· Nick and Danny are talking in the bathroom. Nick says, “I think Sam’s going to go. Simon’s pulled it back this week.”

· Jack and Marc are also discussing the eviction. Jack says, “You could win Marc.” Marc says, “I couldn’t stay here six weeks.” Chloe arrives and asks the boys if they believe in fate. Marc responds, “You’re in control of your own life.”

· Jade is in the Diary Room talking about Marc. “I’m an idiot. I said some stuff about Marc. I was drunk and it was all lies. I really like him as a person but I don’t fancy him. I think Marc’s insecure of his looks. If anything this is a positive, that a reasonably beautiful girl has once said that she found him attractive.”

· Some of the Housemates are in the garden. Marc, Jade and Jack are in the pool. Danny says, “Oh look at the husband and wife in the pool together.” Marc splashes Jade. He unties the top of her bikini.

· Harry, Simon and Sam are talking about Nick. Simon comments, “He’s not very good today.” Harry responds, “I think it’s a lot to do with me because people are saying I’m using him for airtime. Yesterday, he was really, really upset about it.”

· Chloe is in the Diary Room talking about Nick. “Nick’s obviously a bit anxious. I think he worries about his relationship with Harry. I don’t see Harry being with Nick in the real world.” Chloe goes on to talk about Marc and Jade. “There’s some kind of sexual tension. Could be a Big Brother wedding! We thought her and Cristian were really close. And we thought she liked Nick. That must be what polyamorousy is.”

· Housemates are in the garden. Jade is cuddling up to Cristian. Marc shouts, “What are you cuddling another man for! You’re in a committed relationship since yesterday!” Cristian makes Jade move onto another pillow.

· Harry is massaging Nick in the sky room. Nick says, “This is heaven.”

· Harry and Nick are getting close in the pool. Marc comments, “I get mad uncomfortable. Public affection bothers me. I know she’s using Nick.” Danny says, “The only thing I don’t like about it is when she bosses him about.”

· Harry is in Diary Room talking about eviction. “Ideally, I’d like Marc to go. It’d make my time in the house less stressful.

· Some of the boys are talking to Nick about Harry. Jack says, “Don’t you think people might think it’s a bit seedy?” Nick responds, “Someone said, it looks like you’re a 19 year old having fun.” Joel asks how Nick thinks women will perceive his behaviour. “I think they’ll be very confused as to why women are slightly interested in me.” He says his attraction to Harry is sexual. Joel recalls something Harry said on arrival. “She said, I’m ninety per cent women ten per cent men as to who I lean to. I hate men.” Joel adds, “I think she’s using you.” Nick responds, “The last thing I wanted was a relationship in here.”

· Some of the Housemates are in the garden. Cristian, Jade and Joel are in the pool. Nick observes, “Chemistry there… (about Jade and Cristian) I’m telling you she likes him.” Marc shouts, “Joel, get out the pool and leave them two to kiss”

· Jack is called to the Diary Room. Big Brother has set Jack a secret mission to make mischief. Tonight, along with Simon, Jack will become “night ninjas”. They will be told to sneak around the house and complete a series of pranks during the night. Jack is to inform Simon about the task.

· Jack tells Simon about the task. Simon is excited with the opportunity for acting.

· Marc is in the bedroom trying on Simon’s clothes. Marc says, “I look really gay. I love it.” Chloe comes in saying, “I still don’t like you but you look nice.” Simon says, “You look amazing.” He then says to the other housemates, “He’s camp in a funny way. He’s got more mince than me. Marc is my soulmate.”

· Nick is in Diary Room talking about his earlier discussion with the boys. “They’re just saying to be careful.” He is finding it upsetting that people are telling me that I haven’t been spending time with them. “I don’t want to look like a sleazy guy. I don’t want to look stupid. I’m disappointed in myself.”

· Most of the Housemates are eating dinner. The three nominees up for eviction each make a speech. Sam says, “I can’t believe I’ve been so lucky. I think all of you have so many star qualities. I’ve been so grateful to get to know you all. Hashtag Loving Life.” Simon says, “It’s been rocky. I’m glad that I’ve stayed. You’re a special bunch of people.” Marc says, “I hate youse all. Never liked any of youse. I was great to be here for two weeks. These two want it more. I really hope it’s me [to go].”

· Big Brother pages Jack and Simon. Simon wakes up Jack and they go to the Diary Room for their ninja costumes. They have to throw lots of the other Housemates items into the pool. They are told to creep through the house in the stealthiest way possible. They spread things food on the table, toilet roll the living room and pour out the milk.