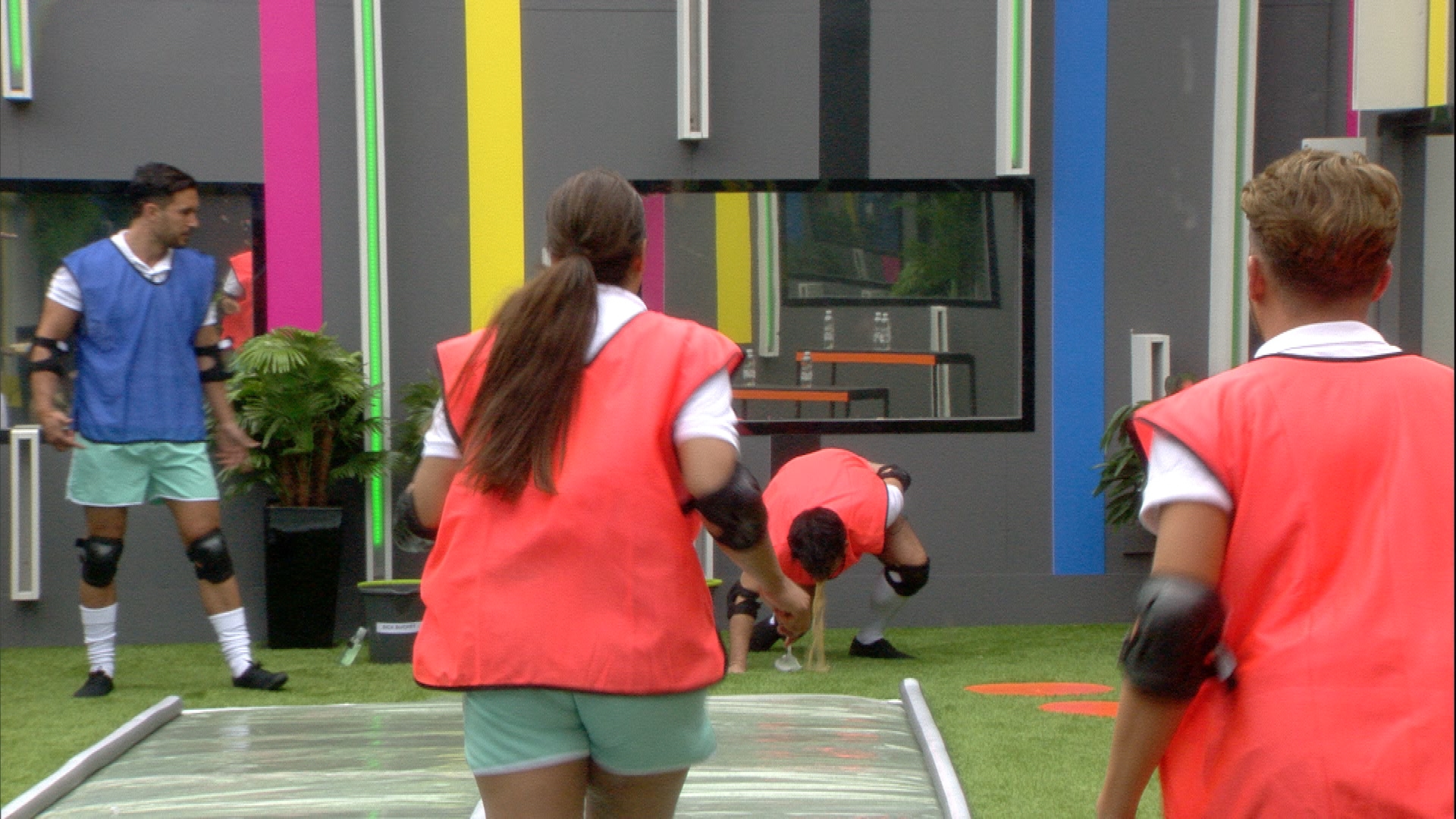 On tonight’s show: Housemates are divided into Team Jason and Team Jayne… Hughie is upset with Jackson and Alex and Chelsea’s makes a shocking admission to Jackson. Evelynproves her kissing skills to Laura, Leteysha is confused by Alex, a game of Spin the Bottle reveals some interesting truths and Evelyn bears her feelings for Alex to Laura – but fails to notice that Alex is in earshot.

Last night Charlie became the fourth housemate to be evicted. Some of Housemates wake up with hangovers.

Laura and Evelyn are in the garden talking about Alex. Evelyn says she will wait for him to make the next move.

Evelyn: “I can’t keep doing this…it’s just gonna be flirting when I‘m drunk and waking up sober with regrets, last night was awkward, I wasn’t wearing any underwear and I’m pretty sure he saw my woosh.”

Andy is in the Diary Room talking about the arguments he has had with Hughie.

Andy: “People see him as loving, kind, gentle and sweet, I’m getting the nasty, malicious, argumentative version of Hughie that other people don’t see…he dislikes me intensely.”

Hughie talks as they wait for Big Brother to announce the results, Housemates explain that Big Brother needs silence. Hughie continues to talk and Jackson shouts for him to be quiet then laughs with Alex. As they enter the house, Hughie complains about Jackson and Alex.

Ryan gives Hughie some advice in the Pod.  Ryan: “You’re gonna have to bite your tongue and say a little, rather than shout the way you do…it comes across like your just arguing with people.”

Jackson and Chelsea are in the garden, talking about Hughie and their fellow Housemates.

Chelsea: “…Noms are gonna be coming around soon… I’ve got some steam to let off soon… I hope I don’t get to that point, if I do, man an’ man gonna get beat up in here, cameras or no cameras, it’s street all the way!”

The task winners are in the Garden enjoying their reward of gym equipment and pizza.In the bedroom Jackson tells Lateysha and Sam about Chelsea’s “cameras or no cameras” comment.

Jackson: “I know he’s chatting s**t but you can’t say that in here.”

Lateysha: “He doesn’t like the fact that no one’s intimidated by him.”

Some of the housemates are in the bedroom. Lateysha is in bed with Sam. Alex is on Jackson’s bed.

Alex: “Are you gonna sing for me tonight, she sings for everyone else but never sings for me.” Alex creeps over cuddles Lateysha but she struggles out of the bed and leaves the room.

Lateysha: “I can’t get my head around it…I just love him as a friend…I don’t want Evelyn to think it’s something when it’s not.”

Some of the housemates are in the Pod playing a game of Spin The Bottle. Lauralists which of her fellow Housemates she has snogged and says Evelyn was below par.

Evelyn: “This game is gonna lead to ‘take your top off,’” Evelyn leaves the Pod.

Jayne asks Hughie which Housemate he would be attracted to if Ryan were out of the equation. Hughie: “I’ve already told Teysh I find her sexually attractive.”

Jackson and Andy are in the garden, making predictions. Andy: “How do you think 12 is gonna become 5 in two weeks? Jackson: “I’m thinking they’ll have a massive final…I’m waiting for the face-to-face ones (nominations).”

Laura and Evelyn are talking about Alex in the kitchen; unaware that Alex is on the sofa. Evelyn: “I told him I fancy him…I made a d**k out of myself. Everyone thinks I’m actually depressed but I’m not. I fancy the s**t out of him and wanna sit on his face but I’m over it.”

Laura: “People can see that you like each other, that’s all. He acts like someone 10 years older would act, don’t keep saying it’s rejection.”

They notice that Alexis lying on the sofa. Evelyn (gasps): “Huh! Was he there the whole time?”