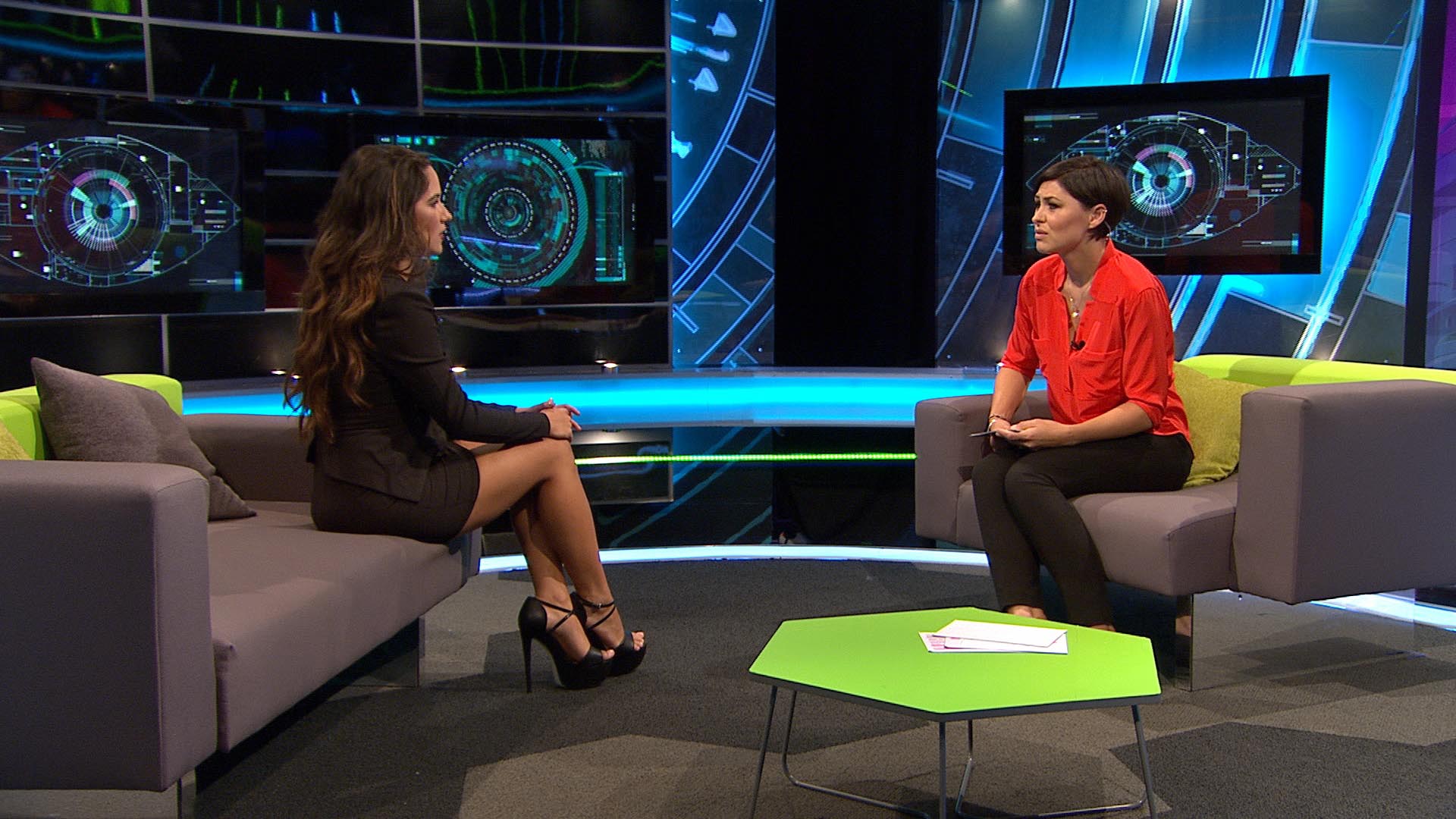 Day 49: Kimberly: “I am looking forward to a new chapter”

Following Kimberly’s shock exit from the house on Friday, she joined Emma Willis, Lauren Harries, Adam Rickitt and ex-Housemate Danielle on Big Brother’s Bit On The Side for her first interview.

Kimberly walked down the stairs to rapturous applause wearing a fake baby bump which she worked to the max, stopping on the stairs and holding it as Emma asked if there were any hot towels!

Emma started the interview by showing a VT of Kimberly’s worst bits and then by asking her if she was feeling OK. Kimberly replied: ‘I’m not 100% but I’m better than two days ago.’

Emma said that it was sad to have Kimberly out but it was good that they could have a ‘good old gossip’; at this point Kimberly removed her baby bump to cheers from the crowd.

When asked if she and Steven were on the same page, Kimberly replied: ‘We’re definitely on the same page.’ She added: ‘I’ve sorted out my pre-Big Brother life and am looking forward to a new chapter.’

Emma then asked Kimberly what she thought of Steven when he sat in the garden with her in the first week and told her he had been to 119 countries: ‘Did you think there’s my future husband or that’s my first nomination sorted?’ Kimberly replied that it was early days and that she ‘brushed it off’ but did think ‘why are you saying that?’

Emma asked Kimberly how emotionally difficult the Sacha situation was for her in the house and she replied: ‘Extremely difficult.’ She stated that she has a lot of respect for Sacha but admitted: ‘I didn’t know how to execute that.’

Emma told Kimberly that her relationship status had confused the public and showed the VT of Sacha’s phone interview with Emma where he stated categorically they were a couple and had been for three years, that she was merely maintaining an ‘illusion’ of a relationship with Steven, he wasn’t worried and labelled Steven: ‘A mummy’s boy.’

Emma then asked if Kimberly could understand why the public were confused and Kimberly replied: ‘Definitely, I would be confused as well.’

Kimberly went on to say that she understood the warning Lynne Goode gave to her son and that it was done ‘in the nicest way.’

Emma then stated that the relationship seemed to become very intense, very quickly and asked Kimberly when she realised she was falling for Steven. Kimberly replied: ‘I noticed I was falling for him the first time he faced eviction and thought why do I feel this way? I don’t want to feel this way.’

Emma asked if she liked Steven’s new hair do and Kimberly answered: ‘I preferred the prior one.’

Emma went on to discuss the public’s perception that Steven could be quite bossy and controlling with her, Kimberly explained: ‘It didn’t feel that way.’ She went on to say she is usually the more controlling partner so it was ‘nice to take a back-seat.’ Kimberly also stated: ‘I never felt that I was in a position where I couldn’t talk.’

Emma then asked Kimberly about Steven’s paranoia and his constant declarations of love and Kimberly replied: ‘I understand how that could be perceived, I don’t think he takes control the way the public do, it’s more like taking care.’

Emma then moved on to sex in the house and told Kimberly that she and Steven were only the third couple ever to have sex on Big Brother. Kimberly joked: ‘Did you guys see that?’ Emma asked if she was surprised by the reaction and Kimberly said: ‘Not really, every time someone has sex on TV, people have an opinion.’ She added: ‘As you become more comfortable you forget about the cameras.’ Emma asked if she also forgot about the ten other people in the bedroom and Kimberly replied: ‘No-one noticed apart from Ash and Helen.’

Emma asked about the talk of living together, marriage and pre-nuptial agreements. Emma asked what Kimberly’s reaction would be is Steven proposed on leaving the house. Kimberly replied: ‘In my head it’s not a definite no. I am falling for him.’

Emma obviously had to ask about #openit and Kimberly said: ‘I’ve heard that a few times, to be honest I’m not sure what it means.’ She delighted the audience by saying: ‘I think things were open anyway.’

Kimberly is then joined on the sofa by Lauren Harries and ex-Housemate Danielle, who has a question for Kimberly – ‘Do you think you robbed me of my place?’ Kimberly responds that she was in hospital with an IV in her arm and that she was ill, so no-one robbed her of her place.

Lauren Harries asked Kimberly if she thought it was ‘ladylike’ having sex on TV and Kimberly replied: ‘I’m not sure what ladylike means,’