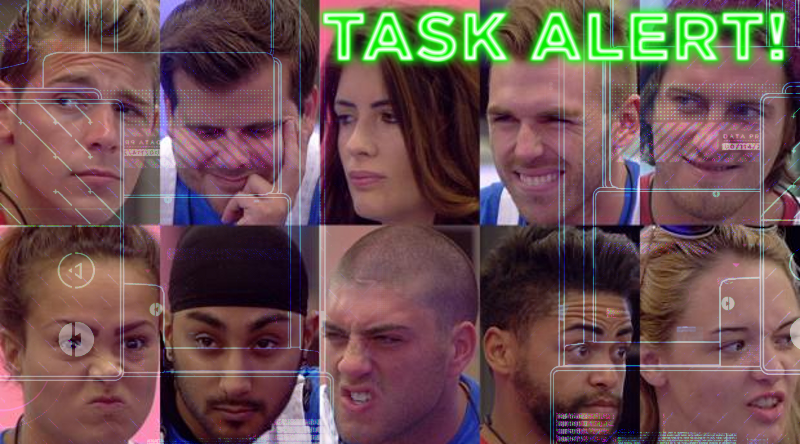 For this week’s shopping task, Big Brother is testing whether one team of Housemates can be turned into ‘Losers’. Will consistently losing a series of secretly rigged games leave them so annoyed and angry that they lose even when they actually have a fair chance of winning?

Big Brother will divide Housemates into the Red Team and the Blue Team. The two teams will compete against each other in a series of head to head challenges, with the winners receiving a luxury shopping budget. However, what the Blue team don’t know is that the real shopping task is called ‘Losers’, and Big Brother has rigged all but one of the rounds so that the Red Team win every time.

The real task is for the Red Team to irritate and annoy the Blue Team, so as they stack up their victories, the Blue Team lose all faith in their ability to win. If the Red Team win the final, fair challenge then the whole house will be rewarded with a luxury shopping budget.

To the Housemates Big Brother will refer to this task as “Red v Blue”. BB will start the task by splitting the Housemates into two teams – reds and blues. They will wear red and blue outfits throughout the two days. The teams will be told that all tasks throughout the two days will be identical and competitive, with the overall winning team earning a luxury shopping budget for the next week.

The winners will will be told they will automatically win each task and their job is to undermine and anger the other team throughout the two days.

There will be one final fair head to head task. The real task is for the WINNERS to undermine the LOSERS’ confidence to the extent that they lose. If the LOSERS lose then the luxury shopping budget will be won by the entire house.

However this is an impossible task for the Losers as the parts do not actually fit. Every few seconds Big Brother will send a burst of water through the pipes breaking the pipe system and soaking the Losers trying to complete it.

The winners will play this first, they won’t play the game. Big Brother will have completed the pipes for them (using a correct set of spare parts).

Each team are given 5 numbered t-shirts, 5 animal heads and 5 different coloured frilly skirts. There is a board behind the teams that shows a word. (e.g. Chandelier, toothpick) This word is a clue to the order that each t shirt, skirt and head should be in. The team’s task is to line up in the ‘correct’ order in the fewest moves. After each team has got in an order and hit a button Big Brother will reveal how many things re in the right place (e.g. “Blue Team you have 10 items in the right position, Re Team you have 14 items in the right position.” Each team has a board with five words on. The first team to crack five codes first win. The task is nonsense but the winners will still win. (The codes have 768 possibilities)

This Diary Room game is a head to head quiz on the buzzer with housemates as the answer. e.g. Which Housemate said Steven and Kimberly “might be a fauxmance?” The winner will be fed certain answers through a secret earpiece, ensuring their victory.

Day 49: Kimberly: “I am looking forward to a new chapter”