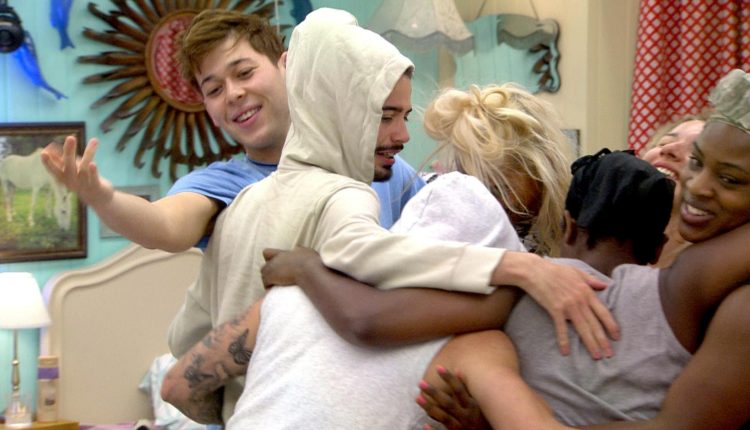 Day 51: Charlotte, Isabelle and Andrew get revenge on Raph’s pranks

During tonight’s show, Kieran walks over to Isabelle and Raph in their beds, singing and banging a spoon against a sauce pan, making as much noise as possible to get his own back for the night before. “This is Isabelle’s dream, to have Kieran serenade her,” says Raph. Isabelle eventually gets up.

Charlotte, Isabelle and Andrew are in the bedroom playing a prank on Raph whilst he showers. They wrap his bed with cling film, hide his toiletries and ducks in the wardrobe and around the house

Hannah, Deborah and Raph are in the kitchen talking about the cling film prank. “I just have to get everyone if I don’t know who it is,” says Raph. “I’m warning you now, come for me and you’ll regret you even tried it,” Hannah replied

Andrew is in the diary room talking to Big Brother about his earlier prank on Raph: “He has been pranking us for ages, and we’ve never got him back, so it was about time…”

Hannah, Raph, Isabelle and Charlotte are in the living room. Kieran walks into the room and addresses Raph, holding curry power and a bottle of oil: “I can smell curry powder in there. If I find curry powder going on my stuff, then someone is going to get curry and oil.” Raph doesn’t admit to the prank.

Raph is in the bedroom looking for his ducks, which the housemates hid earlier: “If you’re genuinely going to give pranks, take them back, instead of getting so serious about them!” Andrew tells him

Raph admits he put curry under everyone’s bed. Hannah is annoyed: “Don’t take things too far in his house because you’re going to do the wrong thing, and somebody is going to flip on you!”

Deborah and Raph are in the garden talking about his earlier argument with Andrew: “It’s your last couple of days, don’t let anything affect you…” she tells him

Andrew apologies to Raph: “I’m a b**tch. My mouth is such a bitchy mouth. It’s a b**tch of a mouth. And I’m sorry. Please forgive me.” Andrew tells him, before they hug

Day 51: Housemates go back to school in latest task