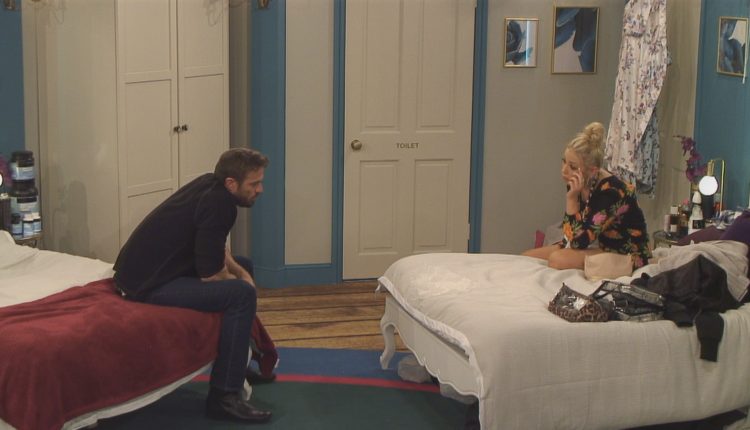 Sarah, Sam, Jemma and Amelia are in the living area comparing ages. Amelia tells them, “I knew I was gonna be the baby in here” and Sarah replies, “you must have only been 18 when you came on tour with us.” Amelia goes onto say, “If I could relive anything in my career, it would be your tour. I had the best time.” Sam asks Sarah what her top moment was when Girls Aloud were at the height of their fame and she reveals, “Probably the Brit Awards. But then when we met the Queen as well at the Royal Variety. I’ve got one more, at Wembley Stadium supporting Jay Z and Coldplay.” Speaking about Chris Martin, Sarah tells them “he always said he’d like to write us a song back in the early days.”

Sam, Jordan and Amelia are in the kitchen. While Sam looks for green tea, Jordan whispers to Amelia, “told you, Day 1 you and Sam I said it, I planted the seed. It’s growing, just enjoy it” but Amelia says “the lad’s oblivious.” Jordan promises to “find out” for her.

In the smoking area, Sam and Jordan are talking about Amelia and Marissa. Sam tells Jordan, “Basically you’ve got a girlfriend in here now” and Jordan replies “I think so…so have you.” Sam goes onto say, “It’s real complicated though, you and Marissa it’s just a bit of fun, for me it’s back of a three year relationship. I’d almost love to rebound with someone” and referring to Amelia “she’s the kind of girl I’d actually like to date.”

Trisha is at the end of her tether in the diary room. She tells Big Brother, “it’s so f*cking stupid, this house. I can’t stand to be around these people one minute longer.” Big Brother asks if she can share her feelings with her housemates and Trisha replies, “I don’t like them, they’re all f*cking fake. There’s no connection. I’ve never been around more fake people.”

Amelia tells Sam that she’s nervous about her upcoming date with Chad – “it’s a bit of pressure.” Sam tells Amelia that he’s “really bad at dates.” Marissa gives Amelia advice on her outfit for the date with Chad – “show some boobs.”

Chad and Amelia have their date in the garden. He asks her “why are you so nervous?” and she replies “it’s a bit weird isn’t it.”

Jemma’s punishment following the task earlier is to colour in a bucket of popcorn Jordan’s punishment means that he must carry a fish around all evening, while dressed as a fisherman. Sarah asks, “Can we eat it?”

Chad tells Amelia that he thought she didn’t want to go on the date – “that’s harsh.” Amelia replies, “I didn’t mean it like that, it’s all fun.”

Paul and Chad are talking in the bedroom. Paul asks how the date with Amelia went. Paul thinks that Chad should make his feelings clear to Amelia as Sam also “has a soft spot for her.” Chad comments, “the minute we came in she went right to sit down with him.”

Paul later talks to Amelia about Chad – “he thought he was getting somewhere. I don’t want to get too involved, but like straight after the date you went over to Sam and you’re not silly you know Sam kinda has a little thing. He kinda feels like he’s been a bit played. I feel really sorry for him.” Amelia replies “that’s just made me look bad now. I didn’t do any of this. I don’t want anything with anyone. I got told I had to go on a romantic dinner for two with him, that’s what I did.”

The VIP members club has a party. Sarah gets tipsy in the hot tub. Chad opens up to Amelia in the bedroom about his feelings for her. Amelia says, “I hate awkwardness.” Talking about Sam, Chad explains, “I just feel stupid.” Amelia then goes onto say, “Paul has made me feel like I’ve done something really bad. I don’t like anybody in that way, I didn’t come in here looking for love.” Chad gets up to leave the bedroom saying, “you’re just not getting it” and Amelia directly asks if he likes her, which Chad confirms. Amelia tells him, “I’m not a mind reader, how am I supposed to know?”