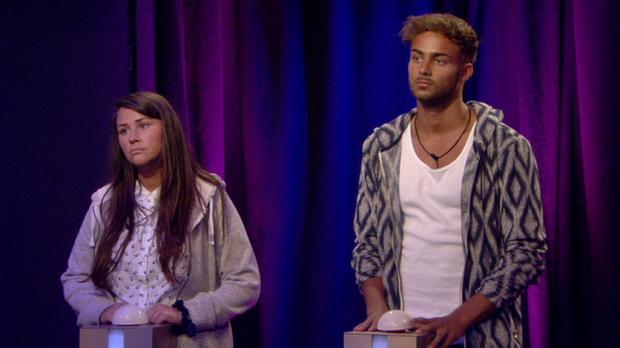 The Housemates have added to the overall prize fund in the latest round of cashbomb tasks.

The Housemates are woken up to the song ‘Money’ by Flying Lizard and are told by Big Brother that they would have the opportunity to add to the winner’s prize fund by taking part in a series of tasks. After the announcement Danny double checks with the other Housemates how to spell ‘canoe’.

Jack is called to the Diary Room and is told he will be offered the chance to accrue some further cash, by receiving a fake tan. All he has to do to win the money is remain in the tanning booth for as long as Big Brother tells him to. Jack replies, “I don’t like tanning, I don’t see the point in it, I don’t want to be orange. Obviously I am going to be now though.” Jack is then taken into the task room and given five rounds of spray tan. He is then told by Big Brother he has earned £1,600 for the prize fund but cannot wash the tan off for six hours. Jack replies, “Look at me! I look like an Oompa Lumpa!”

Joel is called to the Diary Room for the next part of the task and is offered £4,300. All he has to do to win this sum of money is eat all of the pizza provided by Big Brother. Joel replies, “I will give it a go.” Upon eating the first pizza Joel comments, “Cheese and tomato pizza is the perfect dish, and it is healthy, cheese has milk so it is good for your bones and tomato puree is one of your five a day.” Joel struggles to finish the first pizza and is sick. After he finishes the first pizza a doorbell rings and a second one is delivered to him, “No, that is not fair and I am not doing that.” Big Brother reminds him to win the money he has to eat the pizza. Joel declares that he can’t eat anymore and returns to the House to tell them he has failed.

Big Brother calls the Housemates to the sofa and tells them in order to win more money; all of the Housemates must dance to the conga for as long as Big brother is playing the classic party track. The Housemates successfully pass the task and added £5,700 to the prize fund

Big Brother calls Danny to the Diary Room for his tasks and the Housemates are gathered on the sofa to watch. Big Brother then asks him to spell ‘canoe’ in order to win £8,700. After some time deliberating Danny correctly spells the word and wins the money.

The Housemates are on the sofa discussing the online poll and think the reason the public think he is manipulating is because they have thought it before. The all agreed that they didn’t think Joel was there for the money.