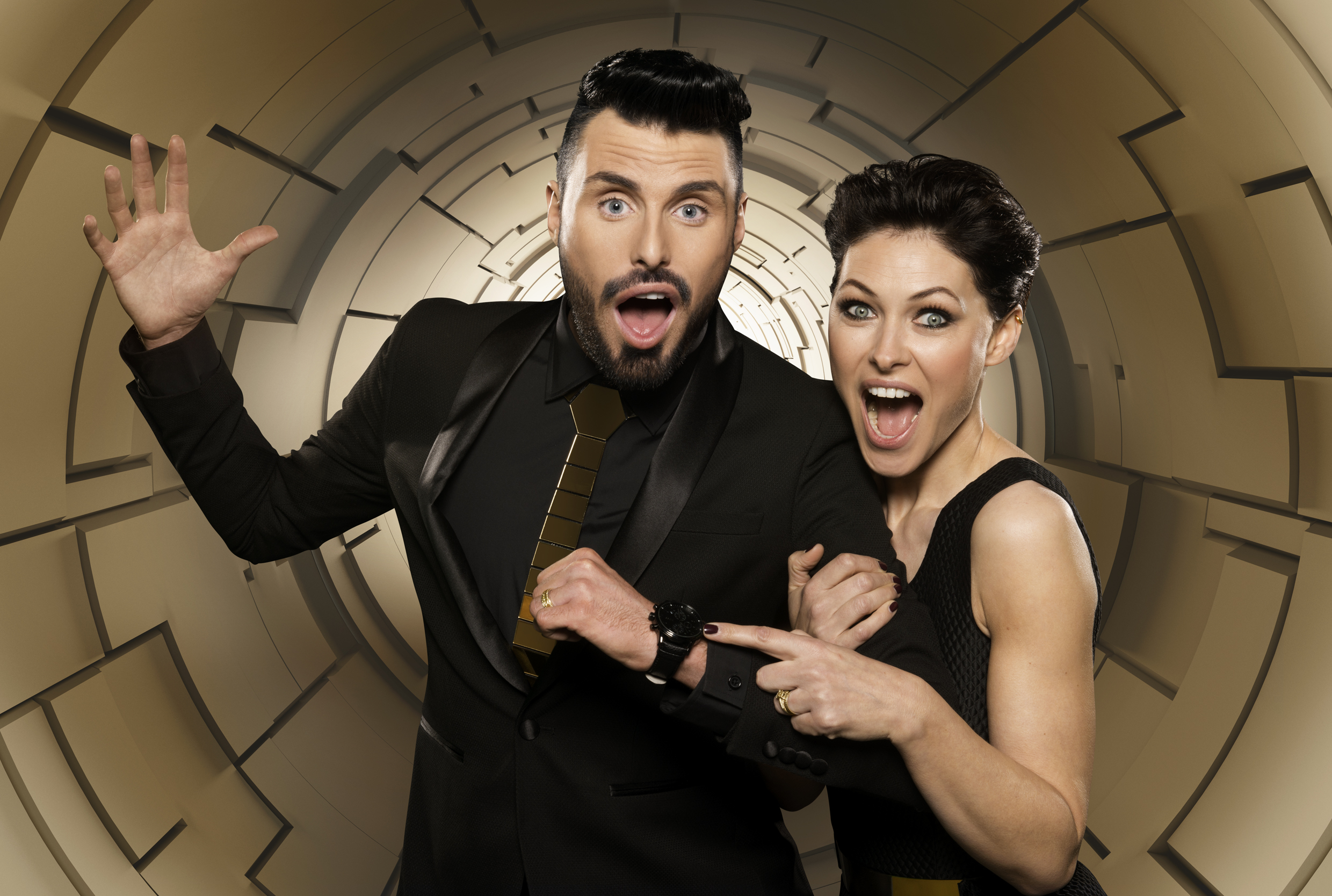 Emma and Rylan are back! Check out what they had to say about the new series of Big Brother

We started the year with a dramatic Celebrity Big Brother. How do you wind down after that?

Emma: Winding down after January was difficult because it was quite traumatic. Every night I would just feel stressed and worried. I would think, ‘What am I going to wake up to in the morning?’ It was like having an unruly teenager that you can’t control. It’s normally the summer series that stresses you out and the celebrity one is full on but jolly. We didn’t see a lot of jolliness in January! I’m hoping the summer will bring us some happiness.

Rylan: We had such a big series in January that I think the key for us is to try and make the civilian series in the summer just as explosive and controversial as the celebrity one.

How do you gear up for the big summer show?

Emma: About two or three weeks before, when we actually start working on it is when I start getting back into it! I just step away temporarily between series because I know it is going to consume me again!

Rylan: I turn into a fan again like I was before. I still am a fan, obviously, but now that I know about these things I try and pretend that I don’t and get excited when things come out to the public!

Do you like to be surprised by the show or do you find out as much as you can?

Rylan: Emma does the complete opposite because she doesn’t like to know anything, but I am too nosy for my own good. I know who’s going in, I know the theme, I know everything. I like to be in the know because it prepares me more and I like getting involved with it. I’m like the fan on the inside!

We’ve got some great weather at the moment. Does good weather make for a good Big Brother?

Emma: Good weather makes for a better everything doesn’t it? I do think the weather can change the tone of it, so I’m hoping we have a gloriously hot summer!

Rylan: The more the sun is out the more the housemates are out to play. People forget that they’re in Big Brother when they’re out in the garden. It’s not like being locked up when you’re in that garden, you feel like you’re out and about!

This year’s theme is ‘Timebomb’. What can we take from that?

Emma: Secrets & Lies was quite self- descriptive and Power Trip was as well, but Timebomb could be a lot of things. It could be their past, present or future and you can play with lots of elements of time. I would like to see them have to live in the future or go back to their past or live in medieval times. I don’t know exactly what they are going to do but I’m a real fan of Back To The Future so I’m hoping it has a lot to do with time travel!

Rylan: Big Brother Timebomb basically means that Big Brother can control time in all of its elements. As an ex- housemate myself, the only sort of structure you have got to your day is time. Even though you don’t have a clock, you wake up in the morning and it’s light, you know that you are going to be doing whatever for the rest of the day, then you go to bed and you wake up again. That is the only thing that keeps you sane in that house. But with this series time doesn’t mean anything. We could revisit any Big Brother series if we wanted to which means we could even see some familiar faces!

So which housemates would you like to see return?

Emma: I loved Gina and Dexter from a couple of years ago. I really liked Chris and Ashleigh from last year. Someone I would have liked to see more of, and I don’t know whether it would have been a good or bad thing, was Sally Axl. She was so hardcore. We may have missed out on a great housemate by her leaving after a week. That’s not saying I’d like her to go back in, but I wonder what she might have given us! Dexter always fascinated me, but he lasted the distance, which I was really pleased about. He is the perfect example; you think he is one thing and then this person just unravels in front of you and you realize that they are someone else.

Rylan: I would love to see the likes of Nikki Grahame, Aisleyne, Makosi, Heidi and Spencer. I would love to see the core Big Brother people like Nadia. There are so many of those people over the years that are the reason that the show is still on air. How would the new housemates feel if all of a sudden someone else pops up or if we rewind a year or fast-forward a year even? Anything is possible with time!

When you meet the housemates can you pick a winner?

Emma: No. I thought that the more I worked on it that I would be able to, but it is totally unpredictable. That is why I love the Summer Big Brother, because you see someone that you know nothing about and you judge them instantly. They go in there and they either prove you right or wrong. It’s like your own test of intuition!

Rylan: No! Housemates change by the second and that is what is crazy about it. But I have seen the line-up and it is a very good one. Yes, it’s a TV show and it is in a bubble but it is one of the only reality shows out there that is not edited or scripted. Everything else that you see is set up for your entertainment, but Big Brother is not. The housemates make their own fate and we show it.

How would you advise the voting public?

Emma: It is a tricky one because I want to see nice people win. However, you need interesting characters even if they’re annoying, and unless you give them time you never know what else they might be. There are a few surprises that the public has given us, but for the most part they get it right!

Rylan: The people who will vote for this show are people who have always voted for this show so I don’t need to say anything to them. Just because they hate someone doesn’t mean they’re going to vote them out. Look at Perez! Don’t vote out people for being opinionated because otherwise you’re going to have a boring series – that is all I would say!

Have you learned to give them a bit of time before judging?

Emma: I am a fan and I will obviously have judgments, but I need to try and keep a clear head. I’m trying to be less judgmental and keep an open mind to try and do a fair interview when they leave!

Rylan: I walked in to a few boos and I won it, so just because someone gets booed on launch night doesn’t mean they’re going to be out first. There are certain housemates, who you think they are not going to last five minutes, then the next thing you know, they finish first or second. It happens every single year and that is why I love this show.

Do people always want to talk to you about the show while it’s on?

Emma:  Yes.  Not people in the street, but anybody who I know will talk about it.  I talk about it every day.  Channel 5 has got it so right that everybody does talk about it when it is on.

Rylan: People always ask, ‘What were they really like?’ Everyone always asks but that is exactly what I would do if I knew someone who worked on something. Well, I do know people who work on stuff and I ring them going, ‘What were they like?’ Its human nature, isn’t it?

What is the look of the house this year?

Emma: It is glamorous, sophisticated and Mad Men-esque. I’ve only seen one episode of Mad Men, but I think I’ll kind of like it!

Will that style be reflected in your outfits?

Emma: If I had a choice I would go futuristic because it’s about time. I will be wearing things that I like and that are weather dependent! I won’t be going full on Mad Men!

What will it be like with Rylan on Big Brother’s Bit On The Side five nights a week?

Emma: He is going to be brilliant on BBBOTS. He’s like, ‘Oh my God it’s every night!’ And I said, ‘I know, and you’re going to be amazing and you will love it!’ He’ll have a brilliant time and I am excited for him.

Rylan: I wouldn’t say I’m nervous but I’m excited. Emma has done the show for years and she has built such a good baby for me to look after. BBBOTS is such a good show and if there was a spin off show category at the Television Awards I know we would be up there! I love the show so much and I will always put the show first. This is my seventh series, so I know what works and what doesn’t. Four years ago that would have been me sitting in that audience. I totally get it!

Can you pick a favourite moment from your time on the show?

Emma: I think it would be the Pause and Rewind task from Secrets & Lies. I loved that. When they were in the garden and they had to freeze and not do anything then rewind. It was such a fun thing for them to do, it wasn’t just to screw with their heads, it was a fun game. Everyone ended up looking a bit ridiculous but in a fun way!

Rylan: I love those Pause and Rewind tasks. I think that should be mandatory every series. Like when you throw someone’s dog in there and they start crying but can’t move otherwise they aren’t going to eat for a week! I love it.

Are you looking forward to being together again?

Emma: I can’t wait! We speak on the phone and we text each other but life is busy so we haven’t seen each other much since January. But being back in the room with him makes me really excited to see him every week. He is so nice and such fun to be around.

Rylan: I love working with Emma. She is such a lovely girl and she has helped me so much. I love her and respect her.

Big Brother returns next Tuesday at 9pm on Channel 5