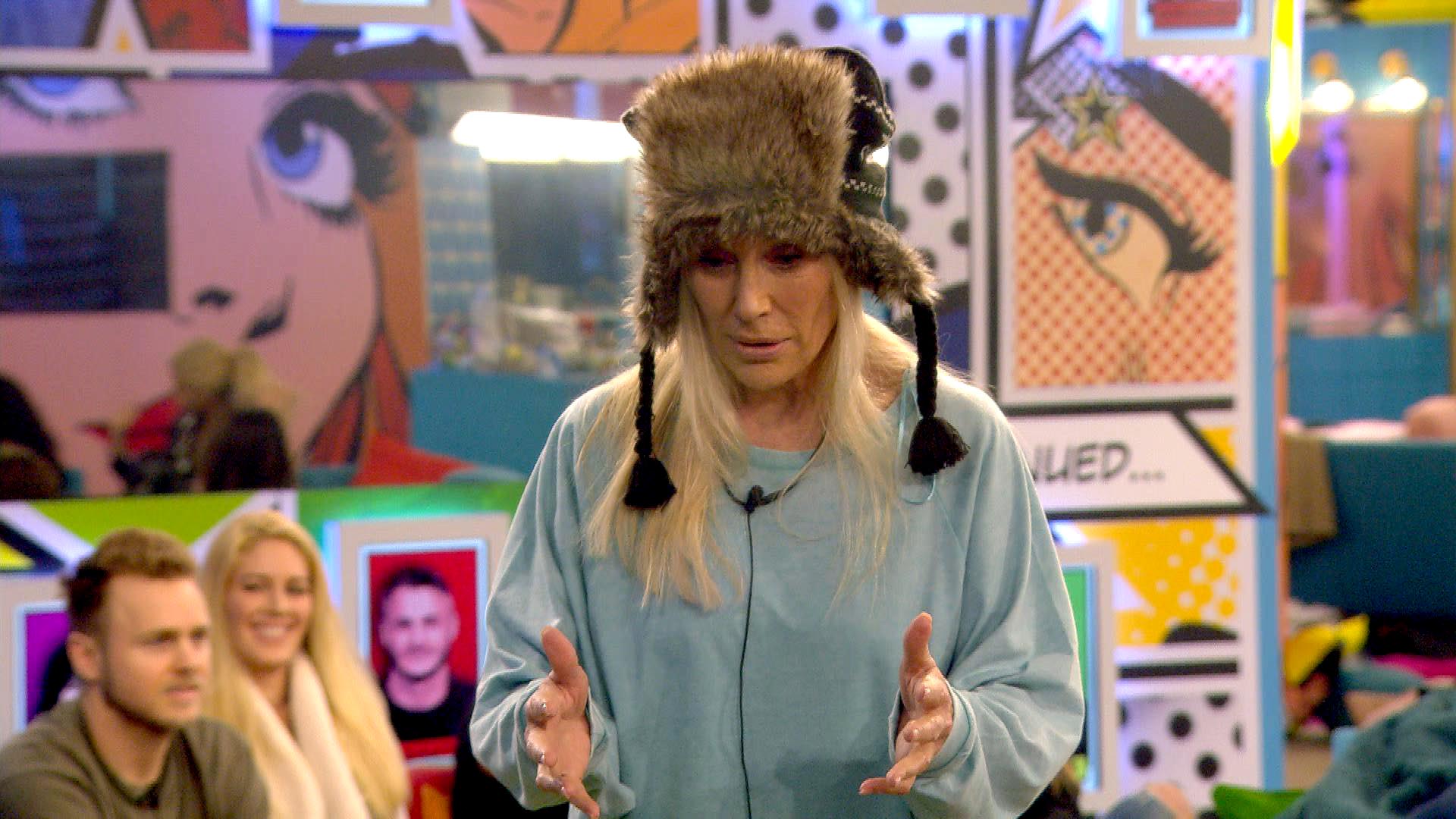 Angie is on a detox in tonight’s show.

On tonight’s show, In the Diary Room, Angie is talking about her clients as a personal trainer “to the stars.” She names a few including Cher and Priscilla Presley. Big Brother sets Angie a task; to run a “January Detox Programme” for the Housemates she believes are the unhealthiest.

Housemates are gathered on the sofa and Big Brother announces Angie’s special task. Angie picks, James C, Coleen, Ray J, Brandon and Calum to undertake the detox. Angie wants to give James C more energy, to “unclog” Coleen, to give Ray J “more energy,” for Brandon to achieve “the new you,” and Calum, “You’ve had seven days in Dubai, five days in here and now you’ll have however many days of health.”

In the kitchen, Nicola says that all the talk of food and lifestyle is “p**sing her off.” She says she has never met people who are so obsessed with food. “It’s insensitive, self-absorbed, and if there was an alcoholic in here I wouldn’t be telling them how great the wine tasted.” She adds that she never drinks water, “it’s for washing.”

Detoxing Housemates then have a supper of leaves and grated carrot the settle down for a positivity yoga session in the garden to rid them of their negative thoughts. James C mentions: “boredom, stupidity, self-obsession.” Coleen adds: “Pissed off, hungry and I want a fag,” Ray J, “un-called for, disrespectful, absolutely ridiculous,” Angie tells him, to be “positive” and Ray J replies, “Peace, happiness, smoking.”

Angie has allowed Ray J a cigarette break. Ray J asks if he can combine vaping with smoking. Angie says, “You push and push, you’re such a f**king slime, you always get your own way.” Ray J tells her that he works hard to get what he wants; “I pay for everything I get.”

Calum returns to the bedroom and explains to Angie that it’s “kicked off” amid the Housemates about how she spoke to Ray J. He tells her that she does not need to go “in” on people, “like you would a client outside of here.” Angie agrees to calm down in her approach.

Coleen is in the Diary Room and says that although she “admires her passion,” being on Angie’s Detox makes her turn into a “petulant five year old.” She mentions that Calum is stressed about it too and laughs, “Because I wanna punch his mum’s face in.”

Big Brother has gathered Housemates for a game of ‘Who’s Lying Now?’ In order to pass, three Housemates must successfully deceive their fellow Housemates. Three housemates have been voted by the viewers as the least trustworthy: Coleen, Jasmine and Speidi. In each round, one of those three must tell a lie and Housemates must identify the liar.

In the task, the untrustworthy Housemates must reveal who they have nominated; one of them will be lying and two will be telling the truth. Coleen and Speidi’s true nominations are revealed.

Brandon, Coleen and James J are in the garden. Coleen is upset that the public voted her as one of the least trustworthy, “That’s got me.” Coleen begins to cry and the boys hug her. “The most fake, it’s the worst thing, cos I’m so not.”

Jasmine and Stacy are in the bathroom. Stacy refers to a comment read out in the task where Jasmine branded her “negative” and wanting “more camera time.” Jasmine says she doesn’t want to get into it, “It’s a f**king joke.” Stacy says it’s “f**ked up,” that Jasmine thinks that but doesn’t want to resolve things.