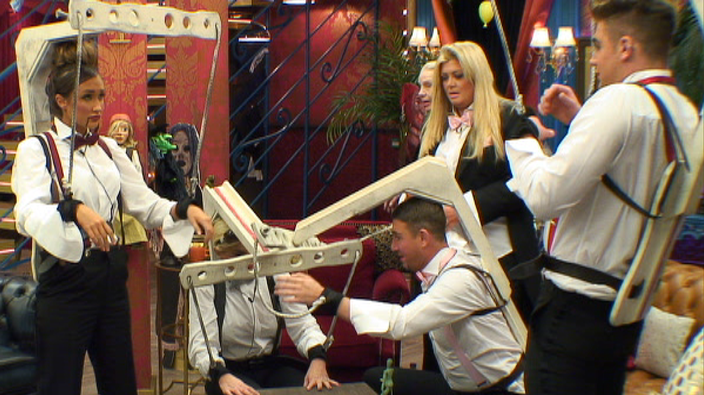 The Housemates have been taking part in their first shopping task

For this week’s shopping task, Big Brother has separated the housemates into puppets and puppet masters. Puppets must serve and respect their puppet masters, or they will be punished. Basic food for the puppets to eat will be provided by Big Brother.

David will not be taking part in this task, and will be resting in Big Brother’s spare bedroom in the house, so Gemma (puppet master) has two puppets: Stephanie and Christopher.

Housemates get to grips with their new roles. Jeremy asks his puppet Megan, to feed him a banana. Scotty T gives his puppet master Nancy, a foot rub. Cold lentil soup and crackers are delivered to the puppets. Megan is annoyed that she has to eat the puppet food, when the puppet masters can eat whatever they like.

In the diary room, Megan tells Big Brother that she is hungry and doesn’t want to eat the cold soup, “I wouldn’t even give my dog that!”

Firstly, puppets are asked who they think is the most boring housemate. Tiffany is mentioned most. Puppets are asked to state their puppet master’s worst character trait. Tiffany thinks John is arrogant, Scotty T believes Nancy is bossy, and Stephanie thinks Gemma contradicts herself.

Except for Scotty T, all of the puppets are given a smoking ban by their puppet masters.

Big Brother throws a party for the puppet masters, puppets are banished from the party.

Megan complains that she is starving. She goes to talk to Big Brother in the diary room, and cries, “It’s not fair, this is not a game. I’m actually hungry. I can’t eat that disgusting sh*t. I ate the century egg for the team. It’s not fair.” Big Brother confirms that she was given a nutritionally balanced dinner.