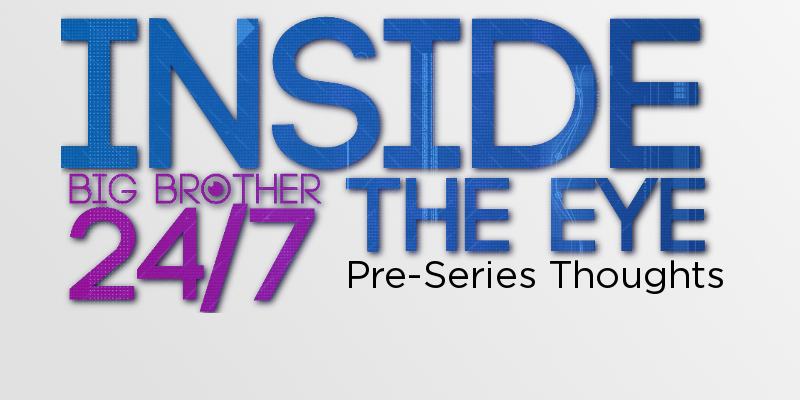 Inside The Eye: Blog #1 – Pre-Series Hype

With the eye, the presenter shots, the advert and the launch date all revealed, I take a look at what Timebomb could hold..

Firstly, let me welcome you all to the very first edition of Inside The Eye! This is a brand new feature that will be replacing Big Brother’s Big Eye this year and will be split between David and I. David will be hosting a new podcast which begins shortly after launch! My side of the feature will be this blog. Each week, I will be posting my opinions on the latest news from the House, my own personal rankings of the Housemates plus my predictions as to what could happen in the House during the following week. Once the series has launched, I will post a blog looking at all of the Housemates and the launch show..

So, with the introduction over with, let’s take a look at the first of today’s topics…

The Eye
After waiting for what feels like a lifetime, we were all finally put out of our misery and were filled with absolute joy at the sight of the brand new Big Brother eye! It was a relief to finally have something official from Channel 5 about the new series, and what an eye it is. I can say that it is easily the best eye on Channel 5, and possibly yet. The cogs around the eye, the metal that looks like a “steampunk” type design just compliment the middle so well. The theme, which is Timebomb, has been portrayed in the eye really well and I can only hope that the theme is reflected in the House itself.

The eye is one of my personal favourites, I’ve grown so fond of it already and it is on par with Big Brother 2013’s eye as my favourite ever. Credit to Channel 5 and Shop for coming up with something so creative.

The Advert
Now, this is where I was slightly let down. The advert started off brilliantly and I love the idea of Emma and Rylan being “spies” investigating the time disturbances. The only thing I didn’t like was the cheesy and pointless shots of the duo running down a very short space, which was clearly the same place both times just from different angles. I think it would have been better without it… but I do actually really love the end shot with the sunglasses. Very cool.

Also, I never thought I’d find myself saying this but I missed the Geordie accent of Mr Marcus Bentley at the end of the advert. Instead we were greeted by some sort of evil mastermind voice, that I’m sure has been used to promote Gotham on 5.

The Theme
I’m so excited about Timebomb! Last year when we were greeted by the terrible twisting and turning series that was Power Trip, the series felt like a dead horse. I was dreading the thought of having a theme this series but after seeing all of the promotion and the eye, I feel like it could potentially top Secrets and Lies – which is easily one of the best civilian series yet.

There is so much potential in this theme for tasks and twists that don’t “fix” the show as such, but just make it interesting. I’m especially interested to see how the tasks will be played out and if the task team will create some overnight challenges. It’s been a while since we got a full on shopping task that tested the Housemates abilities so it would be really nice to go back and have a task like that.

There’s also the rumour at the moment of ex-Housemates returning to the House for a twist or task. Now, I’m all for ex-Housemates returning to the House but this needs to be done carefully and correctly. We don’t want some Housemates the public hate.. *cough* Helen *cough* and for the series to go down the drain. If they’re going to do the theme of ex-Housemates returning, it would be interesting to see the four first evictees from the Channel 5 era – so that’s Tashie from BB12, Victoria from BB13, Sallie from BB14 and Tamara from BB15. They could end up having a competition to go back “into time” (Into the House) and win a place in the house full time to see if they can turn their time around in the House. Saying that, who knows what Big Brother has in store?

So that’s my first impressions on this series of Big Brother! I’ll be here every week when the series starts with opinions and predictions. Until then, enjoy the build up!

Big Brother: Timebomb begins on Tuesday 12th May at 9pm on Channel 5.