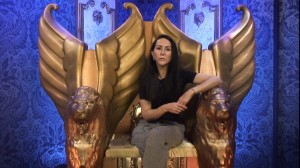 As everyone is made aware – discussing nominations inside the Big Brother House is against the rules of the game. However that doesn’t seem to be enough for a Housemate as Liz Jones has discussed nominations and Big Brother punished her in return.

Disappointed to still be in the house after Lionel Blair became the third person to leave the House last night, the journalist told Linda Nolan: “I’m going to kill you if you don’t nominate me.”

So, this morning – Big Brother confronted Liz and punished her for her actions.

“It is clearly stated in the Big Brother rules that the discussion of nominations is not permitted. Big Brother has reminded you of this throughout your stay in the house.”

Big Brother then repeated Liz’s remark before revealing that, as punishment, she would have to clean all the dirty clothes of her fellow Housemates, which she started straight after the announcement.

Day 16: TASK: In The Limelight