Day 3: Exclusive: We tour the Celebrity Big Brother House ahead of the launch

After popping down to Elstree Studios to do a camera run tour during Big Brother 18 in June, we didn’t expect to be back down at the house so soon! On Tuesday, we were one of the few that were invited down to take an exclusive tour around the refreshed Celebrity Big Brother House!

Along with us was Big Blagger, bbspy, The Bite, RealityBox, BBonBlast and superfan AlfieS12 who were all as keen to get inside the house as we were.

We met with the digital team at Elstree who handed us a day pass and escorted us up to the George Lucas Stage, where they had put on a bit of a reception for us with food and some drink.

We were told that we’d be going into the house in groups – first up were the fansites! We were escorted down from our room to the Big Brother House, entering through a back entrance which came out in the living area. Now, there was something extra special about being inside the Big Brother House on a launch night – especially a celebrity launch! We were one of the first to go inside the new house, which is crazy! Armed with our blue shower caps on our shoes, we headed in. 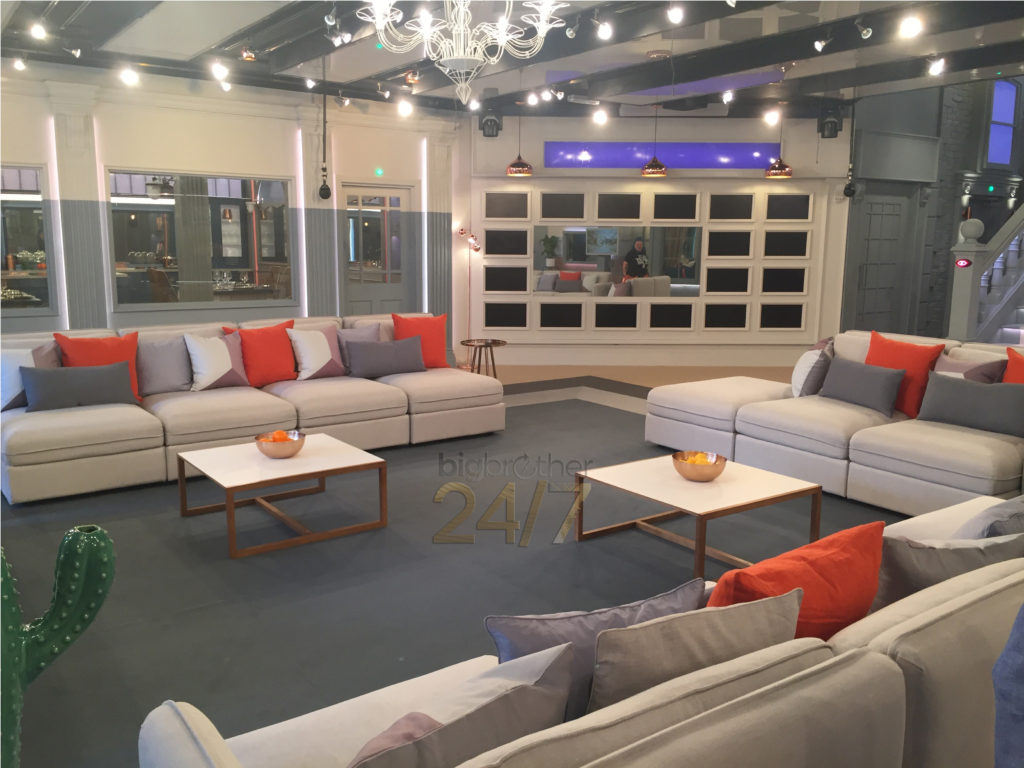 The first thing that hits you about the new house is the smell of freshly laid carpet and paint. The living area is also a lot bigger than you’d expect it to be, especially now that it’s been opened up with the new sofa – finally getting rid of the circular shape! It felt like a high end hotel, that’s for sure. The British village theme had been removed pretty quickly and they’ve done a fantastic job. Rylan joined us in the house and became our very own tour guide.

The bedrooms have been given a massive makeover – now called the Forest Suite and the Blossom Suite. We have to say that we’d much prefer to stay in the Blossom Suite. It was the best out of the two, with calming pink and very comfy beds. It felt quite spacious as well. 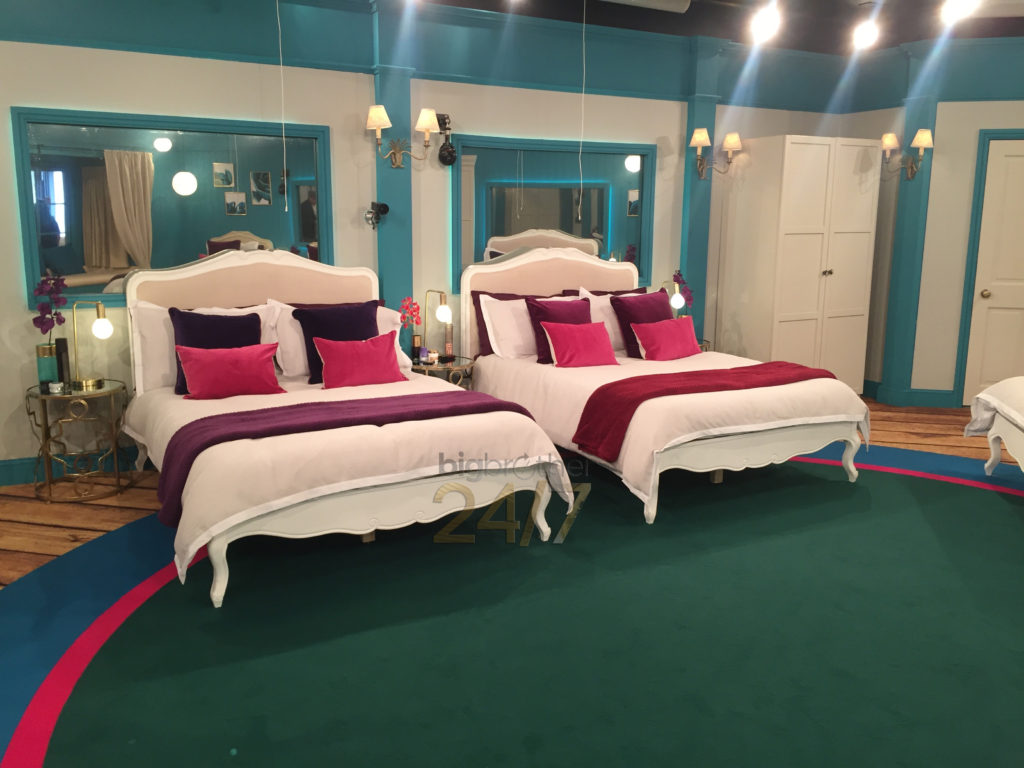 You can’t help but think that having 15 people in the house would actually be a nightmare. Did you know, the wooden texture on the floor of the Forest Suite (or Rose Cottage) is actually just carpet? Crazy right? 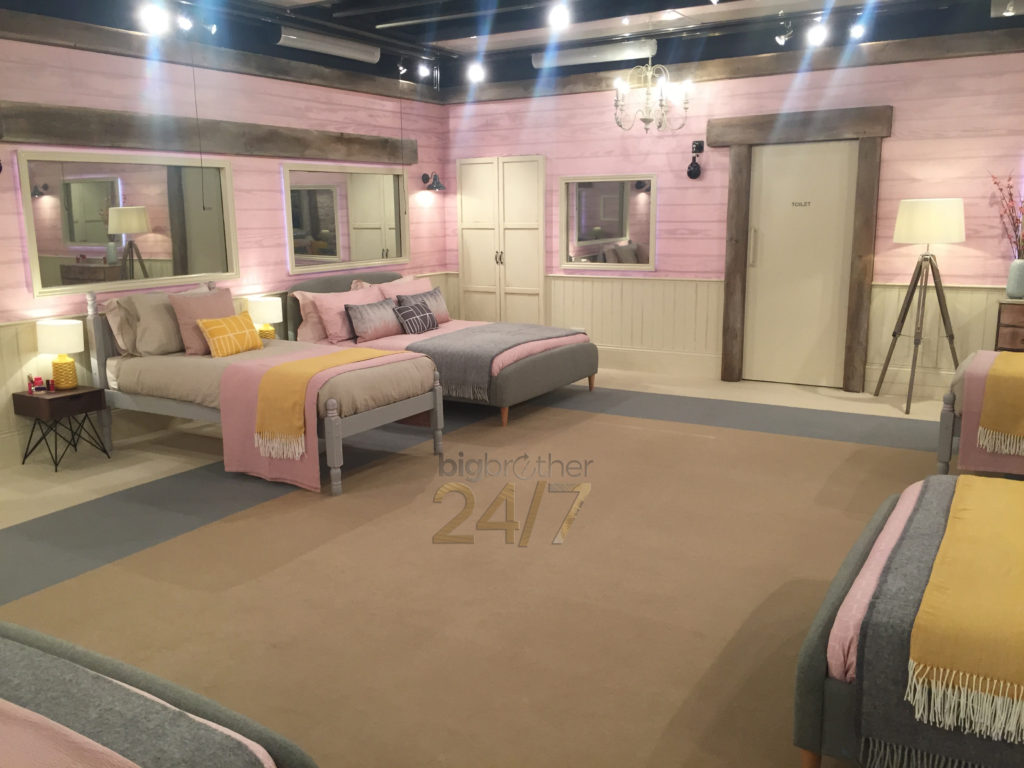 Now, on Celebrity Big Brother there’s one room you don’t get to see and that is of course the toilet. So, we all flocked over and took photos, much to our chaperone’s surprise. Rylan was all for it and agreed that we should take photos as this is the only time we’ll see it.. so, here is the Celebrity Big Brother loo! 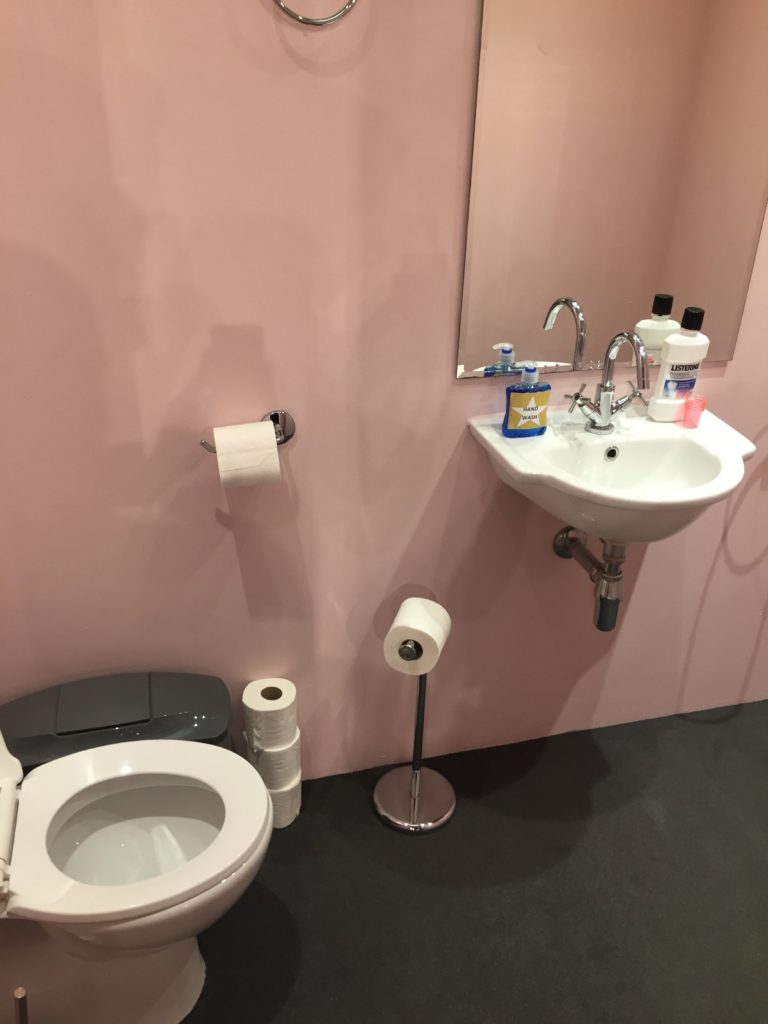 We got lead out into the garden, which is surprisingly small – even though on my last visit, I learnt that it’s actually the biggest footprint that the garden has ever had. The hot tub remained in place, with beanbags now scattered around and a brand new deck chair area which looked lovely. 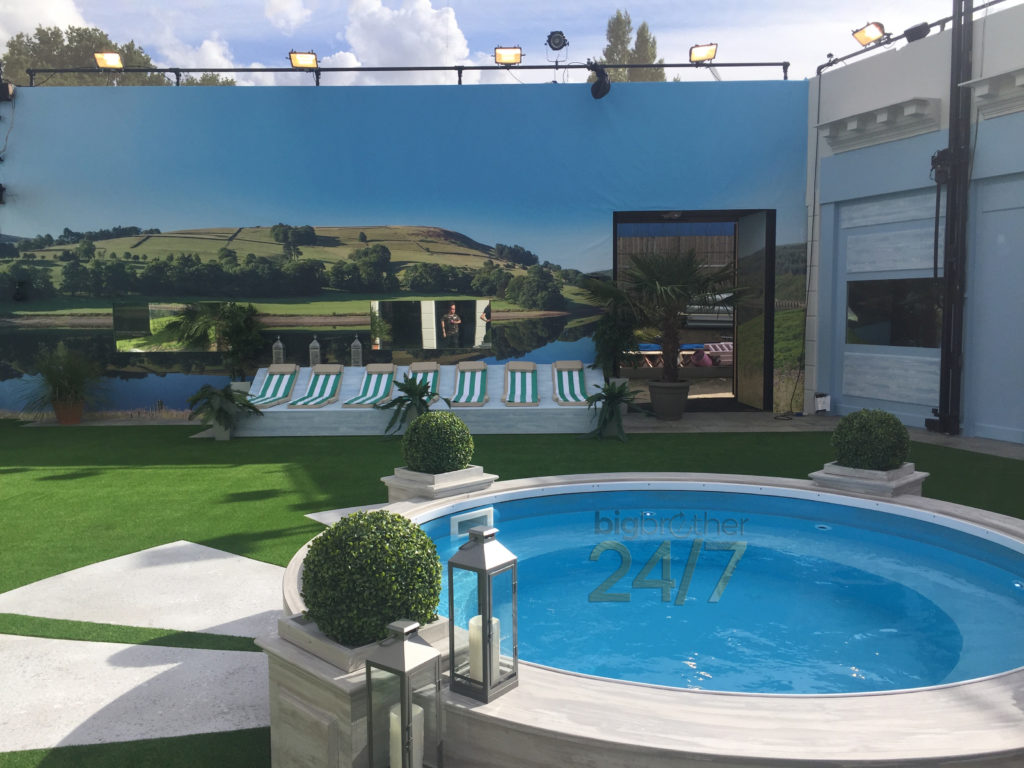 Rylan took us into the bathroom and immediately quizzed us and asked what we noticed about the room. None of us could figure it out but it turns out that the floor of the bathroom is the same as the kitchen floor from Celebrity Big Brother in January! 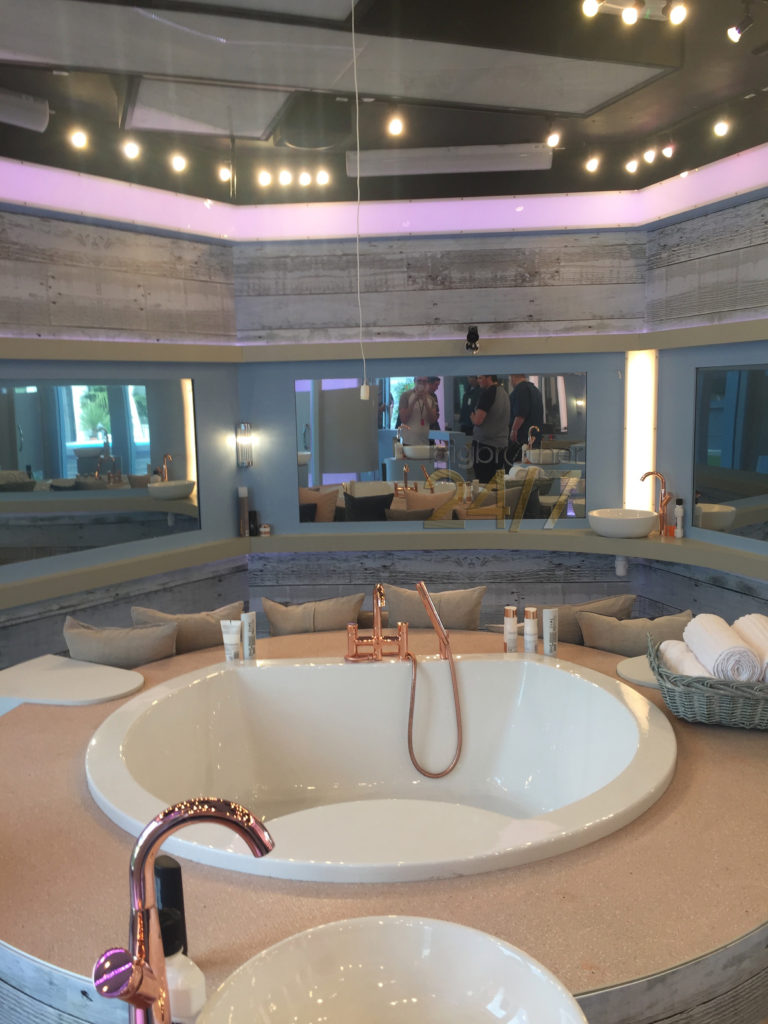 Now, unfortunately we didn’t get to see the Diary Room as it was unfinished. However, we did get to do the infamous walk up the stairs to the main doors! Walking back down, you had that feeling of what it’d be like to be a real housemate and walking down into the living area. 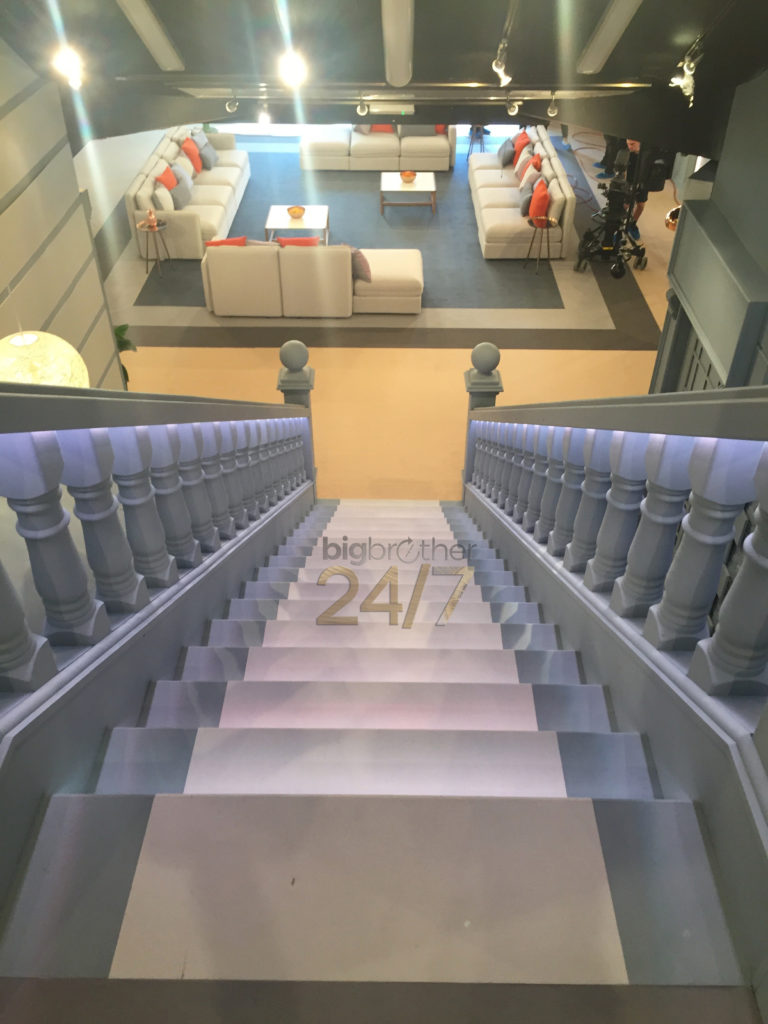 While the house has been given quite the makeover, we found out that the series was actually supposed to start on Friday evening – meaning bosses would have had a whole week to get the house prepared. This meant corners had to be cut, and in different places there are little bits of the village remaining. Above the main front doors are flowers from the vines that were hanging just days before.

We did get to press the Diary Room button though which was very exciting. We found out that the Diary Room chairs from last year were broken and put in the skip earlier this year – which is heartbreaking! After our tour, it was time to leave the house and head back to our reception room in the George Lucas Stage.

Rylan came over to chat for about an hour about all things Big Brother. He’s one of the most genuine people you can ask to meet! Now, while what happens at Big Brother stays at Big Brother, we can say that everything you guys are saying on Twitter, Facebook etc is listened too and taken into account. The production team, the digital team, Rylan, Emma, everyone on the show loves Big Brother with a passion. You are heard!

The final part of the day was to take part in the live show and watch all of the brand new celebrity Housemates enter the house! 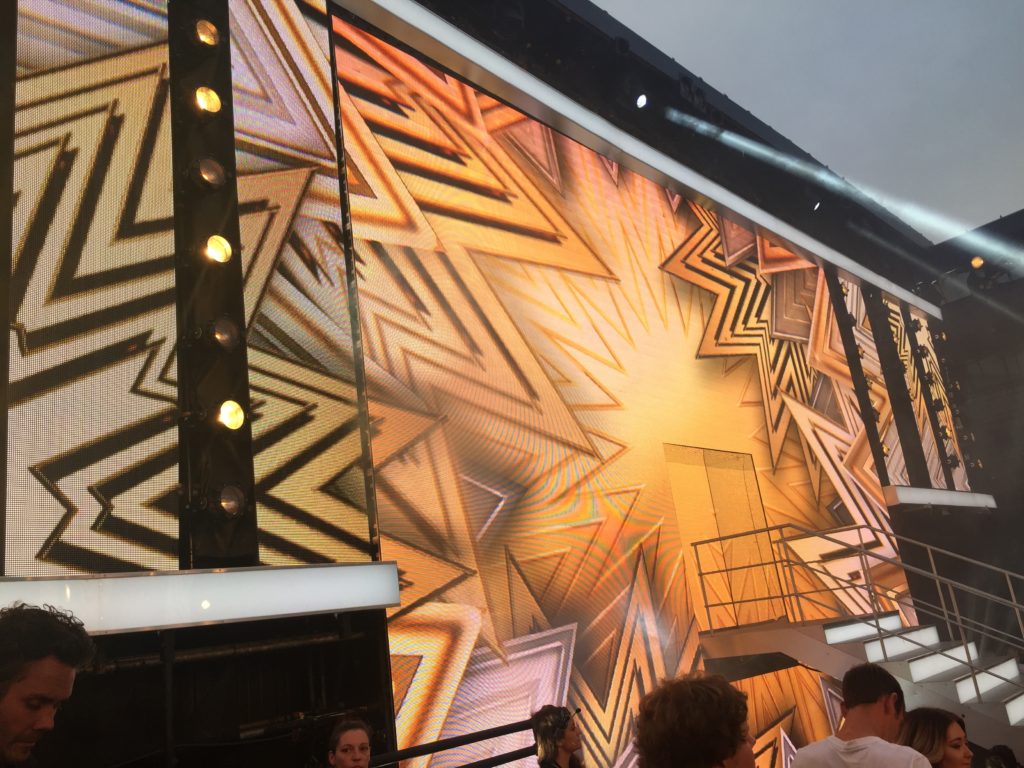 We have to say a big thank you to the team that made this happen. It was a fantastic day and we have high hopes for this series! Celebrity Big Brother continues nightly on Channel 5.

Day 2: Paul sets off the fire alarm and talks to Sarah her past

Day 4: Take a closer look at the Celebrity Big Brother House with mysnapp