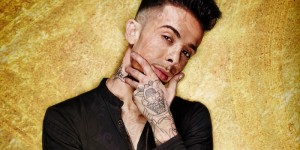 The N-Dubz star was talking alongside Jasmine in the bathroom of the House where he responded to Jasmine Waltz asking him if he’d ever sucked his own penis.

Dappy responded: “Do I look bent?”

Shortly afterwards, Big Brother called Dappy to the Diary Room and warned him that this language could cause offense to viewers. Big Brother also reminded him of the rules of the show.

This is the second comment made, with the first seeing Evander warned over homophobic comments. The comment saw many complaints made to broadcast regulator OFCOM who had confirmed that they had complaints but had not yet started an investigation.

In a statement, a spokesperson for Channel 5 said: “Following Evander Holyfield’s comments about his personal views of homosexuality, Big Brother spoke to him in the diary room.

“Evander was told that his views weren’t shared by a large section of society and that expressing those views and the language he used could be seen as extremely offensive to many people. He was warned to think carefully about repeating them. Evander understood and accepted this.

“The producers of Big Brother will continue to monitor this and will take further appropriate action should a similar matter arise again.”