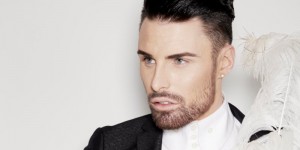 The 25 year old said: “Well, 2013 ain’t been quiet! I never believed when I did Celebrity Big Brother at the start of the year that all this would happen. I’m a lucky boy. And I’m grateful, that’s all I can say. I’m really happy and everything’s good with Dan. And I got it all from Big Brother!”

“All I’ll say is there’s going to be a very big twist. There will be a few false friendships. The house is very royal and luxurious but don’t be fooled by the appearance – it doesn’t mean it will be easy. If anything, that’s a red herring. That’s good because I want to see them suffer – I had to do it, so they can too. I have come up with ideas on tasks for the new series and I think they are going to use one of them.”

Rylan also spoke about losing his presenting partner AJ Odudu who was axed from Bit on the Side after one series, and having Carol McGiffin join the Bit on the Psych panel.

“It’s going to be really sad without AJ. I love her and we’re such good friends on and off screen. But I’ve been given this opportunity and I have to do it on my own and I’m hoping I’ll do as good a job as I did last time. I’m looking forward to seeing what Carol brings. She won’t hold back and that’s why we love her.”