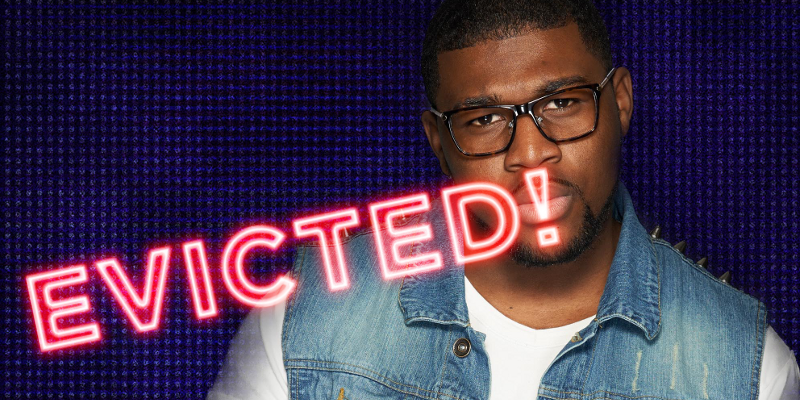 On Friday, Emma announced live that there would be another live show on Monday. It was revealed that this live show would see three new Housemates go in and one of the old Housemates evicted.

After receiving most of the Housemate nominations, Marlon became the first victim of Armageddon Week. While the remaining Housemates reeled at the surprise announcement of Marlon’s eviction, he immediately left to a closed interview with Emma in his underwear!Marlon got a good reception from the crowd and conducted his final interview in a onesie. Emma asked how it felt to leave the house and he said he would rather go this way than any other way and said: ‘It is what it is, it’s Big Brother.’Marlon was asked about buzzer-gate and admitted he didn’t realise it was going to be such a big deal. Emma asked Marlon who he though nominated him and he answered Danielle and Chris. The actual Housemates who didn’t nominate him were: Ash, Ashleigh and Danielle.After watching the VT’s of the nominations he seemed surprised that Mark commented he was too emotionally immature for the show, he said ‘Mark acts like a kid, I mean who cries over a hairdryer.’ Of Winston’s nomination he said it was no surprise and, ‘no sweat off my face.’Marlon watched the VT of the now famous buzzer pressing and laughed throughout. Emma asked him why he was laughing when at the time he seemed genuinely sorry, he said that he did think someone else was going to press the buzzer and that he wanted to stay as long as possible and that it was in the end, a game-show.Marlon said that he thought that Jale’s eviction may have been his fault and that when no-one wants to talk to you in the house it can be intense.Emma asked if it was difficult being yourself in the house and he said yes and that people can appear different after a while which brought up the subject of Steven and Kimberly. Marlon said that he did think that Kimberly was falling for Steven but seemed genuinely surprised at Emma’s revelation of their nocturnal antics.