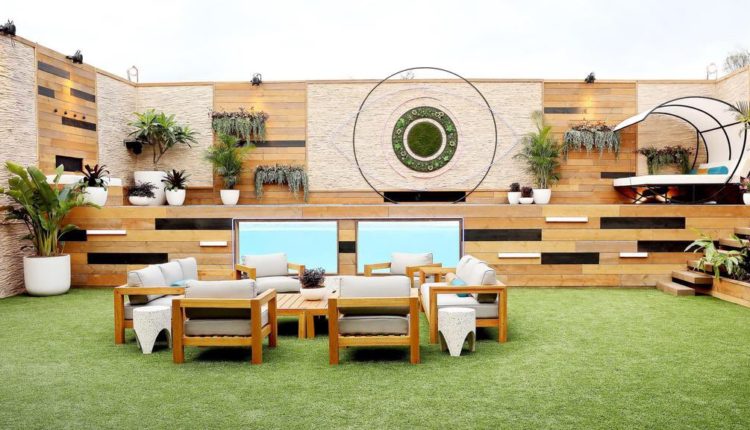 We’ve been given our first look at the brand new Big Brother House.

Big Brother kicks off on Monday, and we’ve been given our first look at the brand new house.

This is the first time that the Big Brother House has not been located at the original home of Dreamworld, instead opting for a brand new compound in Sydney, following a fire at the original location.

The Big Brother House boasts a modern twist, featuring lots of neon lighting and plants throughout. Housemates will be able to enjoy a dip in a large pool, or relax on a sun bed and watch the action.

Inside the house, the living area and kitchen follow the same theme, with a large video wall beside the sofas. Further into the house, the bedroom plays host to mix of single and double beds, while the bathroom has multiple showers and toilets so all Housemates can use them at once.

Following down into a corridor, the Diary Room now takes on a neon look, with the Big Brother Eye behind it. The Eviction Room, below, is where Housemates will discover who will be leaving the Big Brother House.

Housemates will also be taking part in challenges every episode, in the Basement.

The Big Brother House took 50 days to build over all and has 65 cameras. The house features sustainable plantation timber and LED lighting to reduce energy consumption, repurposed from other sets Water saving measures include shower time limits and toilets flushed with rainwater

There are two living green walls outside and inside the house, with herbs for use in the kitchen. Sonia Kruger returns to host the show, after hosting its previous incarnation on Nine.

Speaking earlier on, Sonia said: “One of the criticisms of the new style of the show is it’s not going to be live and therefore that’s a problem, but in reality I might have topped and tailed the show in a live sense (on Nine) but the episodes people watched were (based on footage) recorded the day before. The producers had 24 hours to put the episode together and there were limitations … with this new reincarnation they’ve been able to finesse every episode,”

“There’s an epic nomination challenge and an eviction in the first episode. It’s a world-first, and I’m confident if it’s a hit here in Australia then it will be adopted globally.”

“The nomination challenges are a bit of a double-edged sword,” she says.

Big Brother kicks off at 7:30pm on Monday.